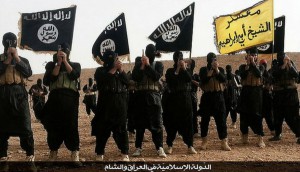 They are the Islamic State group’s elite shock troops. Fanatical and disciplined, they infiltrate cities of Iraq and Syria, unleash mayhem and fight to the death, wearing explosives belts to blow themselves up among their opponents if they face defeat.

IS calls them “Inghemasiyoun,” Arabic for “those who immerse themselves,” a sort of special forces unit parallel to its regular forces that is credited with many of the group’s stunning battlefield successes. A recent online video from the group showed a unit preparing to launch an eventually successful attack on the central Syrian town of al-Sukhna. “Victory or martyrdom,” the fighters, wearing blue bandanas, scream in a circle around their commander, pledging their allegiance to God and vowing never to retreat.

“They cause chaos and then their main ground offensive begins,” said Redur Khalil, spokesman for the U.S.-backed Kurdish People’s Protection Units, which have led a string of military successes against the IS in Syria.

Though best known for its horrific brutalities, the Islamic State group has proved to be a highly organized and flexible fighting force, according to senior Iraqi military and intelligence officials and Syrian Kurdish commanders on the front lines.

Its tactics are often creative, whether it’s using a sandstorm as cover for an assault or a lone sniper tying himself to the top of a palm tree to pick off troops below. Its forces switch between conventional and guerrilla warfare, using the latter to wear down their opponents before massed fighters backed by armored vehicles, Humvees and sometimes even artillery move to take over territory. The fighters incorporate suicide bombings as a battlefield tactic to break through lines and demoralize enemies, and they hone them to make them more effective. Recently, they beefed up armor of the vehicles used in those attacks to prevent gunfire from killing the driver or detonating explosives.

Those strategies are being carried into new fronts as well, appearing in Egypt in last week’s dramatic attack by an IS-linked militant group against the military in the Sinai Peninsula.

Andreas Krieg, a professor at King’s College London who embedded with Iraqi Kurdish fighters, said IS local commanders receive overall orders on strategy but are given freedom to operate as they see fit to achieve them. That’s a sharp contrast to the rigid hierarchies of the Iraqi and Syrian militaries, where officers often fear acting without direct approval.

IS fighters are highly disciplined – swift execution is the punishment for deserting battle or falling asleep on guard duty, Iraqi officers said. The group also is flush with weaponry looted from Iraqi forces.

“In the Iraqi army, we can only run one big battle at a time,” said al-Saadi, who was wounded twice in the past year as he led forces that retook the key cities of Beiji and Tikrit.

Even the group’s atrocities are in part a tactic to terrorize its enemies. It beheads captured soldiers, releasing videos of the killings online. Stepping up the shock value, recent videos showed caged captives being lowered into a pool to drown and the heads blown off other captives with explosive wire around their necks.

The number of IS fighters in Iraq and Syria is estimated between 30,000 to 60,000, according to the Iraqi officers. Former army officers of ousted Iraqi dictator Saddam Hussein have helped the group organize its fighters. Veteran jihadis with combat experience in Afghanistan, Chechnya or Somalia have brought valuable experience.

Foreigners who join IS often end up as suicide bombers. “People go to the Islamic State looking to die, and the Islamic State is happy to help them,” said Patrick Skinner, a former CIA officer now with The Soufan Group, a private geopolitical risk assessment company.

The group’s tactics carried it to a sweep of northern and western Iraq a year ago, capturing Mosul, Iraq’s second-biggest city. Shortly thereafter, IS leader Abu Bakr al-Baghdadi declared a “caliphate” spanning its territory in Iraq and Syria.

In May, it captured Ramadi, capital of Iraq’s vast western Anbar province. In Syria, it seized the central city of Palmyra.

The elite shock troops were crucial in capturing Ramadi. First came a wave of more than a dozen suicide bombings that hammered the military’s positions, then the fighters moved in during a sandstorm. Iraqi troops crumbled and fled as a larger IS force marched in.

Since US-led airstrikes in Iraq and Syria have hampered the group’s movements, IS has lost ground. Iraqi troops and Shiite militiamen retook some cities, like Saddam’s hometown of Tikrit. In Syria, Kurdish fighters backed by heavy U.S. airstrikes recaptured the border town of Kobani after weeks of devastating battles. More recently, IS lost Tal Abyad, another Syrian border town.

Despite that loss, IS shock troops attacked Kobani again last month. Around 70 fighters battled a much larger Kurdish force for two days. They were all slain, but not before killing more than 230 civilians, including roughly 100 children, and more than 30 Kurdish fighters. Around the same time, they also attacked Tal Abyad, where they battled for days until they were killed, and the northeast Syrian city of Hassakeh, where they continue to hold out.

“They weren’t planning to leave alive,” Kurdish commander Ghalia Nehme said of the IS fighters in Kobani. “It seems they were longing for heaven.”