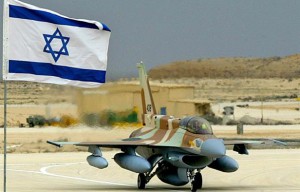 An influential Israeli think tank has called on Tel Aviv to change track in Syria and actively seek the toppling of the Bashar al-Assad regime in order to inflict strategic losses on Iran and Hezbollah.

“Despite the high level of complexity created by Russia’s involvement in Syria – or perhaps, rather, because of it – Israel must engage in active efforts to topple Assad and hand Iran a strategic defeat in Syria,” a policy brief publishedTuesday by the Institute for National Security Studies said.

The dramatic publication, which was co-written by former Israeli military intelligence chief Amos Yadlin, argued that Moscow’s military intervention on behalf of the Assad regime “places Israel in a new reality that requires reconsideration of the ways to confront” regional challenges.

Yadlin—who was the center-left’s candidate for defense minister in the spring 2015 Israeli elections—wrote in his report that ISIS does not pose a “direct military strategic threat” to Tel Aviv, unlike Hezbollah, which he said “can be strengthened by the Russian move.”

The brief held that Moscow was acting as a sponsor for the “radical axis” of Iran, Syria and Hezbollah, by providing intelligence and aerial support for Israel regional foes.

Yadlin said that Israel’s current policy regarding Syria was no longer applicable, arguing that “the survival of the regime has allowed and further entrenched the presence of Hezbollah and Iran in Syria in general and the Golan Heights in particular.”

“If once there was hope that the regime would collapse in the course of events without Israeli intervention, Russia’s active support for Assad weakens the chances of ousting him,” the brief said.

Instead, Yadlin said that “Israel must gear up for active efforts to topple Assad, based on the understanding that beyond the moral imperative, Assad’s ouster will lead to a strategic loss for Iran and Hezbollah in the bleeding Syrian state.”

Since the start of the Syrian civil war, Israeli policymakers have signaled their contentment with their northeastern neighbor falling into bitter internecine warfare.

Israel’s direct military intervention throughout the course of the conflict has been mostly limited to aerial strikes to prevent the alleged shipment of advanced weapons to Hezbollah as well as raids in reprisal for mortar and rocket fire that struck areas in the occupied Golan Heights.

In January, Tel Aviv conducted a strike in Quneitra that killed top Hezbollah and Iranian Revolutionary Guards Corps (IRGC) officers, who Israel said were planning “terror attacks” against the Jewish State along the Golan demarcation line.

“We announce that we stand by the popular resistance in the Golan and we offer military and moral support for it to liberate the Occupied Golan,” he said on May 9, 2013, days after Israeli jets conducted raids outside Damascus.

Nasrallah has since repeatedly vowed to keep the Golan front open. In an early 2015 interview with Al-Mayadeen television, he said that the Golan front against Israel was linked to Hezbollah’s front with the Jewish state in southern Lebanon.

In a January 28 report, pro-Hezbollah daily Al-Akhbar said that “Syria and Hezbollah have been working since the middle of 2013 to prepare other groups to launch a long battle of attrition against occupation forces, starting from the Golan.”