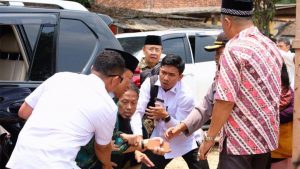 Indonesia’s Security Minister Wiranto was attacked by a knife-wielding man with links to the Islamic State terrorist group, the police said according to bnnbloomberg.ca.

Wiranto, a former military chief who uses only one name like many Indonesians, was stabbed twice by the assailant as he exited his vehicle while visiting an Islamic boarding school at Pandeglang in the province of Banten west of Jakarta on Thursday. Wiranto was taken to a hospital and two other people were also injured in the attack, Dedi Prasetyo, a spokesman for the national police said.

“The attacker is suspected of being exposed to the radical group ISIS,” Prasetyo said, adding the police have also detained a woman suspected to be an accomplice of the assailant.

Indonesia, the world’s most populous Muslim country, has been the target of a string of terrorist attacks in recent years by extremists inspired by Islamic State. In May, police said they had arrested dozens of militants linked to Islamic State who authorities suspected were plotting attacks on political rallies.