The trio of suspects killed by Indonesian police were said to be planning a strike on Christmas Day or New Year’s eve. More than 14 people are being interrogated in connection with plots for attacks during the holidays 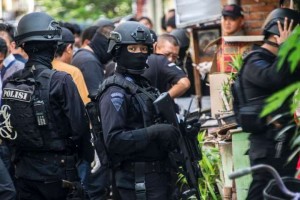 Indonesian anti-terrorism police killed three terror suspects on the outskirts of Jakarta on Wednesday, foiling suicide bomb plot in the process, according to police.

The raid was the latest in a series in that have taken place in recent weeks, which police say have disrupted terror attacks. But they have also raised concerns that homegrown militants in the world’s largest Muslim-majority nation are getting bolder in their attempts to launch attacks.

Earlier this week at least 14 people were interrogated over suicide bomb plots targeting the presidential palace in Jakarta and an undisclosed location outside Java island. Both involved a female suicide bomber – a new tactic for Indonesian militants.

The terror attacks were being planned for Christmas Day or New Year’s Eve, Jakarta police chief Mochamad Iriawan said in a television interview.

The plot called for police officers to be stabbed in order to attract a crowd and then for the detonation of bombs, he said.

Three men were killed in a shoot-out with the police’s anti-terror squad after refusing an appeal from authorities to surrender and come out of the house in a quiet, residential compound in Tangerang, a Jakarta satellite city.

The men threw explosives and fired guns at police, according to National Police spokesman Rikwanto who, like many locals, uses only one name.

A fourth man, who was arrested in the neighborhood, had led police to the house used by the militants.

“Every year, Christmas and New Year’s events are the target of terrorists to carry out amaliyah,” Rikwanto told a press conference, using an Arabic term that’s a byword for suicide bombing in militant circles.

Indonesia, the world’s most populous Muslim nation, has carried out a prolonged crackdown on Islamic militants since the Bali bombings in 2002 that killed 202 people.

But a new threat has emerged in recent years from militants who have switched allegiance to the self-styled “Islamic State” group and from new recruits. An attack in the capital Jakarta in January by IS sympathizers left eight people dead, including the attackers.

Police said the latest holiday season plot was discovered during the interrogation of militants arrested December 10 on the outskirts of Jakarta. They were planninga suicide bomb attack on a guard-changing ceremony at the presidential palace the next day.

In all, a total of five bombs were found at the house in South Tangerang, according to police.

Television footage showed a bomb squad officer wearing a blast-resistant suit entering the house as locals watched from behind a police line.

“During the raid, we tried to be careful but they threw something from inside the house and it was a bomb but it did not explode, Rikwanto earlier told Metro TV. “Then they fired from inside.”