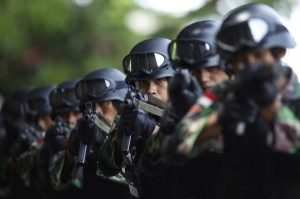 Indonesia’s counter-terrorist police force is to get 600 extra personnel next year to monitor Islamic State networks and head off so-called lone wolf attacks, the chief of police in the world’s largest Muslim-majority country said on Friday, like reported by reuters.com.

Hundreds of investigators and surveillance personnel will join an existing force of about 500 officers at Detachment 88, a police unit tasked with uprooting militant networks and foiling attacks.

“We will do this to monitor terrorist networks more closely since ISIS networks remain in Indonesia and Southeast Asia,” National Police Chief Tito Karnavian told Reuters, referring to Islamic State.

“We will do this to monitor terrorist networks more closely since ISIS networks remain in Indonesia and Southeast Asia,” National Police Chief Tito Karnavian told Reuters, referring to Islamic State.

“It’s more due to increasing ‘lone wolf’ activity and the dynamics of ISIS networks around the world,” he said, when asked if the increase in personnel was in response to a specific threat.

Indonesia has seen a resurgence in homegrown militancy in recent years, largely inspired by Islamic State. Hundreds of Indonesians are believed to have traveled to Syria to join the group, but many have returned as it has lost territory.

Authorities worry militants returning from the Middle East may include battle-hardened fighters who could pass on what they have learned about weapons and attacks.

Karnavian, a former chief of the counter-terrorism unit himself, said the extra personnel will be deployed to certain provinces where “we perceive ISIS networks exist”.

The counter-terrorist force was set up in 2003, after bomb attacks on the holiday island of Bali in 2002 killed more than 200 people.

It was initially trained, funded and equipped by Australia and the United States.

Islamic State-linked militants killed for people in a gun and bomb attack in the heart of the capital, Jakarta, in 2016, but the assault, and a series of others since then, have been poorly planned and executed.