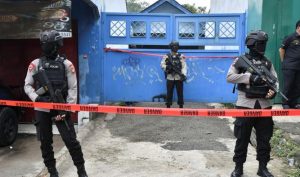 Indonesian police discovered powerful explosives and arrested more suspected Islamist militants on Monday, after a series of raids following a suicide attack a day earlier outside a cathedral on the first day of the Easter Holy Week, like reported by reuters.com.

The two bombers were the only fatalities in Sunday’s attack in the city of Makassar on Sulawesi island, which wounded 19 people and took place as mass was finishing.

Police said the bombers were a married couple who belonged to Jamaah Ansharut Daulah (JAD), an Islamic State-inspired group suspected of suicide attacks on churches and a police post that killed at least 30 people in the city of Surabaya in 2018.

National police chief Listyo Sigit Prabowo said 13 people in Greater Jakarta, West Nusa Tenggara and Makassar had been arrested since the attack and had different roles in its execution, from making the explosives to detonating them.

Listyo told a news conference the male bomber wrote a letter to family expressing his intentions to die for his beliefs.

About 20 suspected JAD members were arrested in January, and authorities believe JAD was involved in the twin suicide attack on a Philippine church in 2019 that killed more than 20 people and wounded more than 100.

Makassar, the biggest city on Sulawesi island, reflects the religious makeup of Indonesia, which is the world’s largest Muslim-majority country and has a substantial Christian minority, among other faiths.