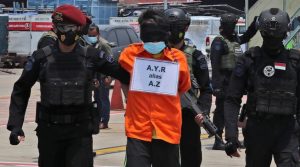 Twenty-two Islamic terrorists arrested by Indonesian authorities in recent weeks have been connected to the Jemaah Islamiyah (JI) militant group — among them a convicted leader who was recruiting and training new members, officials say according to abc.net.au.

The Al Qaeda-linked JI carried out a string of bombings in Indonesia, including the 2002 bombings in Bali that killed 202 people, including 88 Australians.

It was banned by a court in 2008 and has been weakened by a sustained crackdown on militants by Indonesia’s counterterrorism police with Australian and US support.

The 22 arrested men were flown Thursday under the guard of Indonesia’s elite counterterrorism squad from the city of Surabaya, the capital of East Java province, to a police detention centre in the national capital, Jakarta, for further questioning.

Television footage showed them being led off the plane, their hands and legs cuffed and their faces covered.

A dozen of them were arrested in different cities in East Java province late last month.

Mr Hartono said the suspects created a bunker for weapons and bomb-making and prepared a route to escape after carrying out their planned attacks.

Among the suspects transferred was Usman bin Sef, also known as Fahim.

Fahim was a veteran fighter in Afghanistan who was sentenced to three-and-a-half years in jail in 2005 for harbouring Malaysian terror fugitive Noordin Top and for a plot to attack Indonesia’s police counterterrorism squad, known as Densus 88.

“Fahim had established a training ground with a program to create a jihadist group to fight in Medina for next year,” operations chief of Densus 88 Aswi Siregar, told a news conference, referring to the holy city in Saudi Arabia.

He did not elaborate on what the group was planning there.

East Java vice police chief Slamet Hadi Suprapto told reporters in Surabaya that the JI cell led by Fahim had recruited at least 50 new members in the province in the past five years.

The arrests came almost three months after authorities arrested 22 alleged JI members in Lampung province on Sumatra island, including JI’s suspected military leader, Zulkarnaen, who had been wanted for more than 18 years.

Zulkarnaen was arrested in early December and also has been transferred to Jakarta for further investigation.