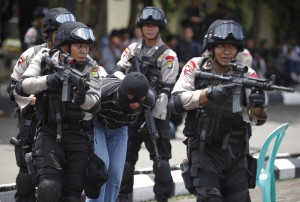 Indonesian police have foiled a suspected Islamic State (Isis)-linked terror plot to strike the presidential palace. The counter-terrorism forces have arrested two men and a woman in connection with the plot.

The law enforcement authorities have seized explosives from the detainees which they were reportedly planning to use against the State Palace in Jakarta to coincide with New Year events. This is the latest in a series of actions against growing Islamic radicalism in Indonesia amid a spate of attacks.

“Very likely as a number of terrorists caught in the country were found to have links with Isis network,” said lawmaker Supiadin Saputra. The woman, 27, who was apprehended, was found with a note reading she was ready to carry out “amaliyah” – a code word for launching suicide attacks.

The police statement said a letter written to her parents by the likely female suicide bomber was intercepted by intelligence officials. The identities of the suspects were not released.

“The plan was to use the bomb at the presidential palace during the change of guard,” said Jakarta police spokesman Argo Yuwono. Powerful explosives wrapped inside a pressure cooker were found in one of Jakarta’s neighbourhood towns, Bekasi. The explosives were later detonated under controlled conditions.

The police are also hunting for another suspect having links with the arrested persons.

Authorities in Indonesia, which has the world’s largest Muslim population, are struggling to deal with the growing presence of IS and other Islamic extremist groups in the country. President Joko Widodo has repeatedly vowed to stamp out Islamic militancy.