You are here: Home / West Asia / Indonesia on alert as ‘Daesh members’ return from Syria 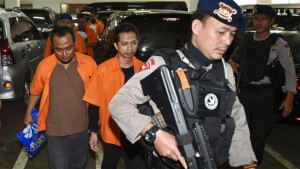 Indonesia’s defense minister announced Wednesday that the country is on alert against any possible terror attacks as dozens of its citizens suspected of joining Daesh have returned from Syria.

Ryamizard Ryacudu was quoted by detik.com as saying that his ministry is tracking 23 suspected Daesh sympathizers who returned from the war-torn country over the last three months.

“They’re [back] from Syria since two or three months ago. I’ve been wary of them,” he stressed, adding that those suspected reportedly mingled with other citizens to reduce the suspicion of security officials.

According to the National Counter Terrorism Agency, around 500 Indonesians have traveled to Syria citing a variety of reasons as of the end of May, with many believed to have joined Daesh.

The minister expressed hope that a revised anti-terrorism law currently being discussed in parliament would be better suited to dealing with the influence of Daesh in Indonesia — including detailing penalties for nationals who join the terror group.

Putting the number of Daesh members in the Middle East at “no more than 30,000”, Ryacudu underlined that the group was nonetheless able to spread terror in many countries — meaning that Indonesia needed to exert serious efforts to prevent its influence in the world’s most populous Muslim country.

“The number of Muslims in Indonesia is very big, making it a recruitment target,” he said.

“There are 200 million Muslims here. If one percent of those were radicals such as ISIS [Daesh], then there would be 2 million extremists. Then the world would be finished.”

Suhardi Alius, National Counter Terrorism Agency chief, also confirmed the return to Indonesia of some nationals who had joined Daesh, but refrained from providing a figure.

He said that of the hundreds of Indonesians fighting with terror groups, 69 have died in Syria.

He stressed that related ministries are now coordinating to prevent the spread of radical thinking, including among inmates and nationals who returned from Syria.

“We must be able to anticipate [the spread of radical thinking]… Because they’ve got militants’ ability,” he was quoted as saying by kompas.com, warning that such suspects’ children and families could have potentially been radicalized.

Indonesia has been on alert against extremist activities over the past year, further heightening security measures after an attack in Jakarta left eight people — including four Daesh-linked suspects — dead in January.