You are here: Home / West Asia / Indonesia: Islamic vigilante group in the spotlight

Indonesia’s Islamic Defenders Front, notorious for its intimidation and violence, faces a backlash after years of tacit official support, like reported by atimes.com 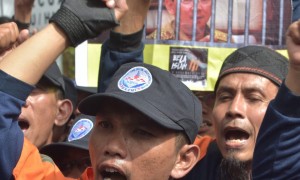 Pressure is mounting on the hardline Islamic Defenders Front (FPI), with Indonesia’s two biggest political parties and a growing number of civil society activists urging the Government to take stronger action against mass organizations they say are threatening national unity.

The ruling Indonesian Democratic Party for Struggle (PDI-P) and key ally Golkar party have added their voice to a backlash against a group whose intolerant brand of Islam and links to elements in the security forces have raised concerns about the direction the country is headed.

Now that he is getting a taste of his own medicine, Shihab isn’t happy. “There is a shadow movement,” he told Tempo magazine. “I don’t know who is directing or producing it, but we are being criminalized with various types of issues. They are looking for mistakes.”

Notorious for religious and moral vigilantism, the FPI has been leading mass demonstrations against Jakarta Governor Basuki Purnama, an ethnic-Chinese Christian whose bid for re-election in the February 15 gubernatorial polls may be stymied by his ongoing blasphemy trial. President Joko Widodo and political and religious leaders are deeply worried at the way intolerance appears to be eating away at the country’s social fabric and what might happen if Purnama is exonerated or otherwise allowed to retain his post.

They are also under fire for not taking a firmer stand against the FPI and other like-minded groups, whose marriage of convenience with powerful political interests has created what one retired general calls a “rotting situation.” Critics say the repeated failure of two successive governments to recognize the dangers of religiously-inspired incitement and do more to confront it is the reason why extremism and intolerance has been allowed to grow to dangerous levels.

FPI’s real strength is a mystery but Australian researcher Ian Wilson says it draws on neighborhoods where it has a presence at any given time and on a fluid population of sympathizers, Islamic school students and Koran-reading networks. While it can mobilize large crowds, as shown in central Jakarta last November and December, increasing government pressure may deter political parties supporting the two other gubernatorial candidates from funding and inflating future protests.

Purnama’s rivals are Agus Yudhoyono, son of ex-president Susilo Bambang Yudhoyono, and former education minister Anies Baswedan, both of whom have engaged in the sort of primordial tactics that proved a failure in the 2012 election when Widodo and Purnama won by a landslide. Purnama is still leading comfortably in the most reliable polls, but if he fails to win half of the vote on February 15 the contest will enter a second round in April, where his chances of victory may be significantly diminished.

Given the loose nature of its membership, disbanding the FPI would be difficult. The radical group has endured for the past 15 years despite involvement in attacks on minority groups and their places of worship and on so-called “immoral’ entertainment places. Up to recently at least, the FPI is widely believed to have had the backing of elements in the police and the security apparatus, which Indonesian researchers say have used it as muscle to enforce protection rackets and other illegal activities.

In the past, nothing would have happened. Waskito’s replacement made a point of saying he would put a stop to bigotry in a province that was once the cradle of the Darul Islam movement, which fought for imposing Sharia law in the 1950s. An Arab-Indonesian educated at Saudi Arabia’s King Saud University, Shihab founded the FPI in August 1998, just months after the fall of President Suharto, who had kept a tight rein on Muslim activism for much of his 32-year rule.

It is not a new tactic. During Suharto’s New Order years, the thuggish Permuda Pancasila (Pancasila Youth) organization – named after Indonesia’s state ideology – was often used to carry out violent attacks against political opponents. Former Jakarta police chief Nugroho Djayusman told diplomats it was natural for him to have contacts with mass organizations, saying it was because the sudden release of Islamist energy after years of repression was seen to be a security risk.

In a later leaked US cable from mid-2006, Yenny Wahid, the daughter of avowed pluralist and former president Abdurrahman Wahid, was quoted as saying those who had helped form and finance the FPI had lost control of it. The cable said the sponsors had “created a monster”, adding: “Although anyone with money can hire FPI for political purposes, no one outside of the group can control Rizieq Shihab, who functions as his own boss.”

Shihab lives with his wife and seven children in the teeming Tanah Abang district of central Jakarta, within a quarter-mile of six mosques and an even shorter walk from the small Christian school where he received part of his primary education.But a modest lifestyle and religious freedom he never enjoyed under Suharto’s New Order regime belies a strong belief that embracing democracy means abandoning the fundamentals of the Islamic faith.

“Democracy is more dangerous than pig’s meat,” he famously declared during a speech in April 2013. “If we consume pig we are polluted, but can still be returned to a state of purity if we cleanse ourselves seven times. If we eat it we’ve sinned, but we haven’t become an inﬁdel.”