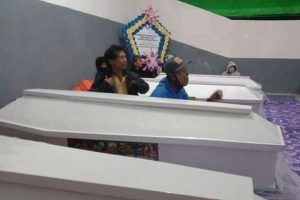 Terrorists from the East Indonesia Mujahideen have killed four Christian farmers including one Catholic in Indonesia’s Poso district in Central Sulawesi province, like reported by ucanews.com.

They were killed when they were working in a coffee plantation in Kalimago village at 8.25am on May 11. The four victims were only identified as MS, S, P and L. Their funerals were taking place on May 12.

Central Sulawesi police spokesman Didik Supranoto said another farmer escaped the attack by five sword-wielding men and reported the incident to the village head and police.

He said farmers from the village told police that two victims had wounds to their necks. Unconfirmed reports said one had been beheaded.

“The perpetrators are East Indonesia Mujahideen members because the farmers know one of them, Qatar, from the most wanted list,” Supranoto said.

The Madagoraya task force team, military and police are hunting for the terrorists.

Stanislaus Riyanta, an intelligence analyst from the University of Indonesia, told UCA News that East Indonesia Mujahideen now has 10 members. Leader Ali Kalora is being hunted by police and has pledged allegiance to Islamic State.

“They are increasingly pressed because they are hunted by the task force team, police and military personnel, so they killed the local people,” he told UCA News.

The group is believed to have been established in 2012 and, unlike the more well-known Jamaah Ansharut Daulah group, whose area of operation covers the whole of Indonesia, its area of operation is centered around Central Sulawesi province.

The group is affiliated with both the Islamic State and Abu Sayyaf, a terrorist group based in the southern Philippines.

Its first leader, Santoso, was killed in a gunfight in 2016 in which another militant leader, Muhammad Basri, was captured.