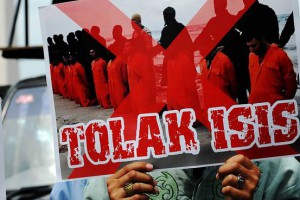 Indonesia is taking its battle against support for the Islamic State terror group into cyberspace, with the government blocking 22 websites it says contained radical content.

The Ministry of Communications and Information Technology said it had blocked the websites to stop the spread of radical propaganda. The ban was based on a request from the National Agency for Counterterrorism, the ministry said on its website.

Last week, Communications Minister Rudiantara, who goes by only one name, told The Wall Street Journal that the government had already blocked more than 70 websites considered to be trying to build support for Islamic State.

“What we are doing right now is something we have to address immediately; it’s very critical,” he said, referring to efforts to find and block such websites.

Concerns that a growing number of Indonesians are showing support for the Islamic State in Syria, sometimes referred to as ISIS, have cropped up in recent months, particularly after a group of Indonesians was detained trying to cross the border between Turkey and Syria and another was reported missing.

Police and government officials say they worry that ISIS could be creating a renewed sense of militancy among some radical groups in Indonesia, and patrolling the Internet is one of several measures they’re taking to counter the threat.

Indonesia already monitors online content through a decree issued last year aimed at blocking material it deems negative, such as pornography. Mr. Rudiantara says it monitors content through an automatic search engine and reports from the public.

He says the ministry is working closely with the National Counterterrorism Agency. It is also working to form panels of advisers that include prominent religious figures, which can provide recommendations on how to deal with negative content, said Mr. Rudiantara.

Even then, security officials and analysts say online recruitment isn’t the real problem. All the material online is reinforcing the desire of some people to go [to Syria], said Sidney Jones, the director of the Institute for Policy Analysis of Conflict (IPAC). “But in some ways, it’s the personal messages on social media and between and among some of the existing radical networks that is driving some people to go.”

She says the people going to join ISIS are almost all linked to existing extremist networks, and the police too say face-to-face contact is more successful in recruiting supporters than the Internet.

Some in the public, meanwhile, took to social media Tuesday to voice displeasure with the ministry’s move. The hashtag #KembalikanMediaIslam, or Return Islamic Media, was the top trending hashtag in Indonesia as of Tuesday afternoon and one of the top trending terms worldwide. Some messages questioned the ministry’s definition of radical, calling the move Islamophobic.

Concerns about the use of the Internet and social media to recruit supporters for extremist groups such as ISIS have gained prominence in recent weeks, particularly after a video started circulating last month that showed young Bahasa-speaking boys in an undisclosed location training to perform jihad.

“ISIS and its affiliates have been very, very good about making use of social media and YouTube to try to push forth their propaganda, and they’ve been doing it in Bahasa Indonesia,” said Ken Conboy, a Jakarta-based security consultant.