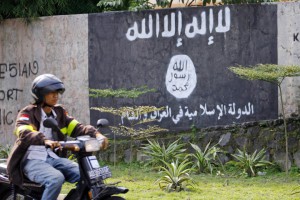 The first Indonesian to stand trial for joining Islamic State says he signed up with the group in Syria and underwent two weeks of military training with its fighters.

Despite his remarks, 63-year-old father of four Afief Abdul Madjid may be a tricky case for the prosecution. The only law he could be charged under dates back more than 90 years to the Dutch era and hasn’t been used since independence in 1945.

“I haven’t committed a crime,” Madjid said as he left the Central Jakarta District Court in March. “God willing, IS will win. They are working for Allah.” Madjid’s lawyer, Ahmad Midan, said his client is innocent.

Madjid’s trial reflects the challenge for Indonesia’s legal system and President Joko Widodo in tackling extremism. Faced with the need to address his falling popularity, a slowing economy, weaker markets and internal power squabbles, the risk is Widodo, known as Jokowi, fails to move quickly to head off rising militancy in the world’s most populous Muslim-majority nation.

The emergence of Islamic State threatens to re-energize violent militant networks across Southeast Asia, especially in Indonesia, the region’s largest economy. Between 200 and 500 Indonesians are believed to have joined the group in the Middle East, giving them new skills they could use if they return. Supporters at home might heed IS calls for violence in its name.

“It’s still not a priority for them, but it’s clearly a threat, if not now then later,” said Adhe Bhakti, director of the Center for the Study of Radicalism and Deradicalization, speaking of the Jokowi administration. “It’s just not in front of their eyes,” he said. “Jokowi is busy defending himself against political attacks over the price of fuel and his choice of police chief.”

The first Indonesian militants began leaving for Syria and Iraq in 2013. Despite calls by police and the anti-terrorism agency, the government hasn’t sought to tighten existing laws or pass new ones to better prosecute returnees. Such laws are important to deter other would-be militants who are considering traveling to IS-held territory.

Indonesia’s anti-terrorism laws only apply to domestic activities. As a result, Madjid, who has a wispy, graying beard, is being tried for “rebellion against a friendly state.” A verdict is expected around July or August.

The law was introduced by the then-Dutch rulers in 1921 to target people agitating against its allies in Europe, according to Adriaan Bedner, a lecturer in Indonesian law at Leiden University. It remained on the books after independence and hadn’t been used until Madjid went on trial in February, said Eddy Hiariej, an Indonesian professor of criminal law who advised police on the statute.

“I’m convinced it can be applied in cases like this,” he said. “It’s not complicated at all. The police just needed things explained to them.”

At the hearing, prosecutors called a foreign ministry official as a witness to explain to judges that Syria and Indonesia had long had close ties, making it a “friendly state.”

“It’s a creative solution to a difficult problem,” said Sidney Jones, director of the Institute for Policy Analysis of Conflict. “It is going to be interesting to see whether the judges are willing to buy it. I’m sure there are going to be questions raised about how you know they are actually involved in rebellion.”

The law carries a maximum prison term of five years. Madjid is being tried concurrently under the anti-terrorism law on charges relating to the funding of a domestic terrorism camp in 2011. He was in Syria from mid-December 2013 to mid-January 2014, according to his charge sheet.

“We are trying with what we have at hand,” said prosecutor Suroyo, who goes by a single name. “Let’s see what happens,” he said outside the court.

Securing political support for new laws to target IS followers is not easy because they could be portrayed as stigmatizing Islam, said Bhakti. “Making laws that have associations with Islam is problematic.”

Police recently released a group of six people detained at Surabaya airport and believed headed for Syria, after holding them for seven days, because they had no evidence, said police spokesman Agus Rianto.

“It takes a long time to make laws,” he said. “We are waiting for the parliament.”

Madjid wasn’t kept in a holding cell before the hearing, which the anti-terrorism officer assigned to guard him said was on account of his age. He could chat to family and supporters. When the call for midday prayers rang out, he rolled out a mat and performed the Islamic prayer.

Madjid spent 13 months in prison starting 1981 on suspicion of involvement with militancy, according to a police investigation report. In 2013 he was designated by the U.S. Treasury as a leader of extremist group Jemmah Anshorut Tauhid.

He said he went to Syria to see “with his own eyes what was going on” and joined the training because not doing so could have aroused suspicion he was a spy. The charge sheet alleges on returning to Indonesia he addressed public gatherings on the need to support IS.

The risk of large-scale attacks in Indonesia has diminished since the 2000s when al-Qaeda-linked terrorists carried out bombings.

Still, “the rise of Islamic State could yet prove a game changer,” said Hugo Brennan, Asia analyst at Verisk Maplecroft.

“Since IS has ordered its followers to target foreigners, a switch in tactics by IS-affiliated groups to reflect this command may well follow,” he said. “ Consequently, the risk of random, small-scale attacks in areas popular with foreign nationals has increased in recent months.”