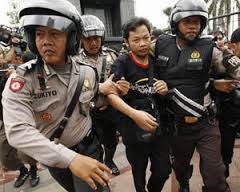 Indonesian police have arrested three militants with links to the Islamic State in Iraq and Syria (ISIS), who were planning to launch bomb attacks during the Independence Day celebrations next week, police and sources said on Friday.

The men were plotting to attack churches and a police station on Monday in the city of Solo, on the main island of Java, when the country celebrates the 70th anniversary of its declaration of independence, police said.

Elite anti-terror police detained the men in the city Wednesday, local police chief Nur Ali told a press conference. Solo is the hometown of President Joko Widodo but it is not clear whether he plans to celebrate independence day there.

“Due to the hard work of the police and help from the people, the police managed to foil their plan to conduct terror on Aug 17,” Ali said.

Those arrested were a 29-year-old bombmaker; another man who helped mix explosives; and a third individual who helped with planning and surveying potential targets, he said. He did not reveal their identities.

Chemicals used in bomb-making, explosives and 21 bomb detonators were seized in a series of raids, the officer said.

Police said the men had links to a militant network in Syria, without giving more details. A source with the anti-terror police said several USIS flags and shirts were seized from them.

The source said the group was given orders and funding by a Indonesian extremist who is now an ISIS member in Syria.

The militant group controls vast swathes of territory in Iraq and Syria, and extremists from around the world have flocked to join them.

Hundreds of Indonesians are feared to have joined ISIS in the Middle East and there are fears that they could revive sophisticated militant networks on their return and launch attacks.

The world’s most populous Muslim-majority nation has struggled with Islamic extremism for more than a decade and has faced a series of attacks on Western targets, including the 2002 Bali bombings, that left 202 people dead.

However a crackdown has weakened the most dangerous networks, and attacks in recent years have mostly been low-level and targeted domestic security forces.