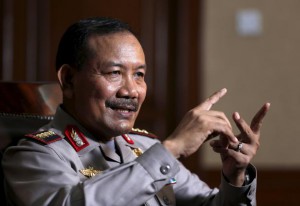 Indonesia is bracing for the return of experienced Islamic State fighters from the Middle East who would be capable of carrying out attacks far more deadly than the assault on Jakarta last week, the country’s police chief said on Monday.

Thursday’s attack in the heart of Jakarta was a hastily executed “Plan B” by Islamist militants, after police raids had disrupted preparations for other strikes against Christmas and New Year events, Police General Badrodin Haiti told Reuters in an interview.

Eight people, including four militants, were killed in the assault on the capital’s main Thamrin Road that involved pistols and home-made bombs.

The attack, the first of its kind in Southeast Asia to be attributed to Syria-based Islamic State, could have been far deadlier, but the militants lacked training and powerful weapons, Haiti said.

“I believe this was a Plan B. Their main target was Christmas and New Year. They chose Thamrin (after that plan was disrupted) because they were hoping for a big impact despite their small size, because this is a crowded centre,” he said.

“The perpetrators had the opportunity to take more victims (during the attack), but because their capabilities were limited, we were able to take them out of action.”

There are fears that much deadlier attacks could follow, with the return of experienced frontline fighters with Islamic State currently in Syria and Iraq, Haiti said.

Authorities say about 500 Indonesians have travelled to the Middle East to join the extremist group. About 100 are believed to have returned, although experts say only about 15 have combat experience.

“Those on the frontlines are better trained, because they’re facing their enemies (in) the field. If they come back, then it will be dangerous because they can carry out acts of violence and terror,” Haiti said.

“There is the possibility (of a bigger attack) if they can train people in preparing explosives,” he said.

The majority of those believed to be involved in Thursday’s attack, include two of the four militants who carried it out, were part of an attempt to establish a training camp in the forests of the northern province of Aceh that was thwarted by police in 2010, Haiti said.

In the wake of the latest attack, police would redouble efforts to monitor radical networks in Indonesia, he said.

“We want these networks to be mapped fully, because they can collaborate with each other. There are about nine distinct terror groups in Indonesia. So our hope is that this incident can reveal their collaborations,” he said.

“We have found communications between people in Syria and here and we should be able to tell who is responding to those communications and can become a future threat.”

The last major attack in the world’s most populous Muslim nation before last week was the twin bombing of luxury hotels in Jakarta in 2009.

Police said in December that a series of raids disrupted plans by militants to launch a string of deadly attacks on Christmas and New Year celebrations, as well as against the country’s Shia Muslim minority.