You are here: Home / West Asia / India’s Mi-35 helicopters ready for first battle in Afghanistan against Taliban and Daesh 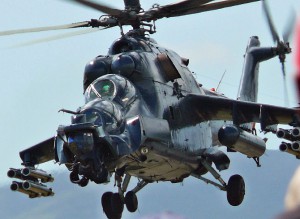 Afghanistan on Wednesday said three of the four multirole Mi-35 helicopters that India donated to it last month have been assembled and are now fully operational to combat terrorism in the war-torn country, reports PTI.

According to the Defense Ministry, the helicopters will be used in the ongoing Helmand battle for the first time.

“We have always been helped by India. The helicopters donated by India to Afghanistan have been assembled and will help us fight terrorists,” Tolo news agency quoted Ghulam Sakhi Ahmadzai, deputy chief of procurement of the Defense Ministry, as saying.

Thanking India for its cooperation, Air Force commander Abdul Wahab Wardak said help from regional and global countries was crucial for bringing peace and stability to the country.