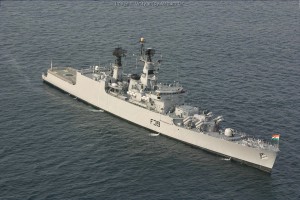 Upon their arrival, the national anthems of India and Iran were played and the commanders of the Indian naval fleet were accorded warm welcome by their Iranian counterparts.

This naval fleet comprised of Frigates F37 and F39 is visiting Iran with the aim of boosting peace and friendship between the two countries.

The Indian fleet is scheduled to stay in Iran’s first naval zone for four days.

Meeting with Iranian Navy commanders and local officials and visiting historical sites and natural attractions of Hormuzgan as well as visiting the islands of the province is on the agenda of the Indian fleet’s four-day stay in Iran.