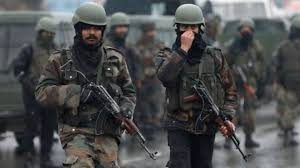 At least three terrorists and a soldier were killed in a major gunfight that broke out near Srinagar, the capital city of Jammu and Kashmir – on Wednesday. Police said the gunfight started after terrorists, travelling in a car, started firing at a police checkpoint in the Lawaypora area of Srinagar. The incident took place on the Baramulla-Srinagar highway when the security personnel intercepted the vehicle.

During the past week, this was third major attack on security personnel by terrorist groups in Kashmir in which at least three terrorists were killed; meanwhile four aides of the terrorist group Jaish-e-Mohammed were arrested.
Last Friday, terrorists hiding in a truck had opened fire on security personnel at a toll plaza on the national highway connecting the cities of Srinagar and Jammu during a routine vehicle inspection by Indian security forces. During the exchange of fire, three terrorists were killed and a policeman was injured.

Security forces in India’s restive Jammu and Kashmir have recently been on alert after several incidents of terrorist attacks in Pulwama district in South Kashmir.

The number of terrorist attacks on security personnel has been rising for past two months despite claims made by Indian Army that the situation in the restive Indian-administered region along the de facto international border was under control.