You are here: Home / West Asia / India wary of ISIS attacks via Bangladesh 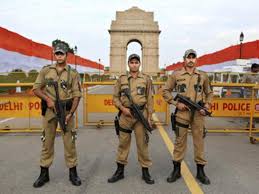 The Narendra Modi government has started countering the radicalization threat from the Islamic State though the group’s links with the Jamaat-ul-Mujahideen Bangladesh (JMB), which has led to concerns of a possible fallout in the border states of West Bengal and Assam.

The IS has claimed several terror attacks in Bangladesh and reports have suggested it is working with cadres of the JMB, responsible for the October 2014 blast in Burdwan. JMB cadres have reportedly shown allegiance to the so-called “caliphate” of IS chief Abu Bakr al-Baghdadi.

There is a heightened alert over JMB after the probe into the Burdwan blast showed its cadres had infiltrated border states. During the investigation, security agencies arrested 18 people from Bengal, Assam and Jharkhand.

No less than 10 IS terror strikes have taken place in Bangladesh in the past year, and security agencies are concerned of a possible fallout in Bengal and Assam.

Sources, however, said there is no evidence of any logistical or financial support to IS activities in India from Pakistan, which itself is reeling under the group’s threat. The IS claimed a recent attack on the Pakistani consulate in the Afghan city of Jalalabad that killed seven.

As the government counters the IS threat, evidence has emerged that busted terror modules in India were funded from West Asia via the hawala route.

With one more person arrested from Aurangabad in Maharashtra on Saturday night, the total number of people arrested for alleged links to the radical fundamentalist group has risen to 16.

Top government sources said the Indian chapter of IS was named Jundal Khalifa (Army of the Caliphate) by so-called Amir-e-Hind Mudabbir Sheikh of Mumbra town in Thane district.

Sheikh, a trained web designer from Thane Polytechnic, was radicalized over the Internet in the past two years and was on the scanner of security agencies.

Besides being associated in the past with Wahdat-e-Islam, a splinter group of the SIMI, Sheikh was in touch with Yousuf-al-Hindi, the nom de guerre of ex-Indian Mujahideen terrorist Mohammed Shafi Armar of Bhatkal in Karnataka.

Armar and a couple of ex-IM terrorists are now fighting with the IS in Syria and Iraq.