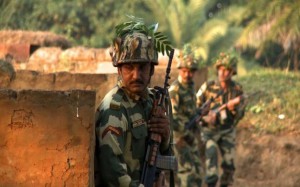 Gujarat was today on high alert following intelligence inputs that terrorists have sneaked into the state, with raids being conducted at Kutch and other places, security beefed up at vital installations and sensitive areas and NSG teams on standby.
The leave of all police personnel, including officers, has been cancelled and the state government has increased security at all the main temples of the state for ‘Maha Shivaratri’ festival tomorrow.
A massive security operation has been launched and raids were conducted by a police team, led by South Kutch Superintendent of Police Makrand Chauhan, early this morning in Varnora village of Bhuj taluka in Kutch district bordering Pakistan, police sources said.
The Kutch police also raided Noorani Mahel hotel and Muslim Jamat Khana in Bhuj, they said.
“The state government received a serious information from central government yesterday that terrorists have entered Gujarat. We held a meeting where it was discussed that all measures will be taken to ensure no untoward incident takes place,” Gujarat Minister of State for Home Rajni Patel said.
With ‘Maha Shivaratri’ festival tomorrow, the state government has also increased security at all the main temples.
“Especially during Maha Shivratri, lakhs of pilgrims visit temples in Junagadh, Somnath and other temples. So we have issued high alert for security of these temples too,” Patel said.
Two National Security Guard (NSG) teams comprising nearly 200 personnel have been sent from Delhi to Gujarat to meet any eventuality, official sources said.
Policemen were seen patrolling the highways since early morning. Security of all the Air Force and Army bases has also been ramped up.
“The Centre has offered all help and NSG task-force has arrived here which  is currently being briefed about the various (vital and sensitive) locations,” he said.
“We have alerted coastal as well as border police near Kutch to take all necessary steps to beef-up security. In Kutch, we have asked the local police to remain in co-ordination with Border Security Force (BSF),” he said.
“Till now, we have not found any suspicious person. However, whatever information is received by us is serious and we are taking all necessary steps about it,” Patel said.
State Director General of Police P C Thakur, who issued orders late last night cancelling leave of all policemen, said they were prepared to deal with any situation.
“We are on high alert and prepared to deal with any situation. We have started combing operations across various locations. We have also sensitised places that see high rate of footfall,” Thakur said.
“We are taking all precautions. Security across coastal areas and other vital installations has been increased. If required, NSG team will be deployed as per their protocol,” he said.
On reports claiming that Pakistan alerted Indian authorities about the possible infiltration of terrorists in Gujarat, state Director General of Police (IB & CID) Pramod Kumar said the state Intelligence Bureau received information from the Central IB.
“We don’t know anything about Pakistan’s role in providing this information. We received this information from Central IB. I don’t know anything more than that,” said Kumar.
Tight vigil is being kept at railway stations and airports.
Notably, a Pakistani fishing boat was seized on Friday by a BSF patrol party after its occupants fled upon seeing the border security personnel in the Koteshwar creek area off the Kutch coast along the Indo-Pakistan border.
BSF officials had said that nothing suspicious was found in the boat.
deccanherald.com