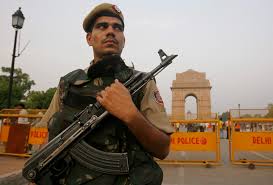 India Tuesday said that Islamic State-led attacks are possible in this country and it needs to be on high alert.

Terming the threat from the Islamic State as a “global challenge,” the minister said: “All nations must come together to fight against it.”

He added: “India is fully aware of the looming threat by the ISIS (Islamic State of Iraq and Syria) and is taking precautionary steps.”

The minister’s remarks came in the wake of the deadly terror attacks in Paris last week, in which nearly 130 people were killed.