You are here: Home / West Asia / India-Pakistan tension mounts after attack in Kashmir 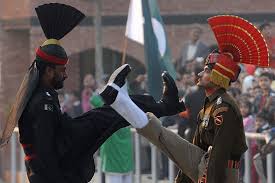 Tensions between New Delhi and Islamabad have reportedly hit boiling point following Sunday’s attack on a military base in Kashmir killing 18 soldiers.

According to America’s CNBC, although tension is high, military escalation isn’t expected—for now.

Many called it the deadliest attack on security forces in nearly a decade.

However, no group has claimed responsibility but India has accused Pakistan of involvement, labeling it a terrorist state for supporting militants believed to be the perpetrators of Sunday’s attack.

India claims the gunman were members of Jaish-e-Mohammed (JeM), a terror group based in Pakistan and known for brutal tactics in India-controlled Kashmir to force the withdrawal of troops.

Islamabad has categorically rejected the allegations, describing the charges as New Delhi’s attempt to deflect attention from the deteriorating human rights situation in Indian-controlled Kashmir.

The severity of Sunday’s attack has raised public anger in India, with protesters burning the Pakistani flag and calling for revenge. In a Pew Research Center survey of 2,464 Indians released on Monday, half disapproved of Modi’s relationship with Pakistan while three-fifths supported the use of force against the war on terror.

“Delhi doesn’t appear to have a clear game-plan on how to calm the situation, and so it will want to desist from any knee-jerk reactions to the attack that could make things even worse,” CNBC quoted Zalewski as saying.

The bickering between the two arch-enemies is currently playing out at the on-going United Nations General Assembly (UNGA) session in New York, where Pakistan Prime Minister Nawaz Sharif is expected to raise the issue during his address on Wednesday.

On Tuesday, Indian forces killed at least 8 suspected militants along the 800 kilometre border with Pakistan, Reuters said. Known as the Line of Control (LOC), the partition separates areas under Indian administration, primarily Jammu and Kashmir (J&K), from Pakistan’s territories, which include.

In recent years, India has refrained from aggressive responses to terrorism, which included the 2008 Mumbai attacks carried out by Pakistani militants that left 166 dead. Instead, New Delhi has used international gatherings to highlight what it calls Pakistani support of terrorists.

For now, it appears the government will continue this approach. The Indian Express reported on Monday that military commanders warned Modi against calls for immediate surgical strikes inside Pakistan.