You are here: Home / West Asia / India on high security alert with arrest of 14 Daesh militants 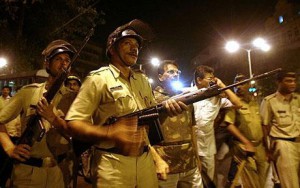 Indian police seized explosives and arrested 14 people across the country in a major crackdown against Daesh members ahead of the country’s Republic Day celebration on Tuesday.

The suspects, aged 20 to 30, mostly students, were rounded up in four states.

It is learnt that four of them were arrested in Hyderabad, two in Mumbai, six in Karnataka and two in Uttar Pradesh.

Delhi police commissioner B. S. Bassi confirmed the arrests but declined to provide details on the ongoing operation which involves central security agencies.

Local media reported that police in Hyderabad had seized weapons and explosives from the suspects.

It is not clear whether the suspects were directly connected to each other but initial investigations indicated they were sympathisers of Daesh.

New Delhi has been on high security alert since early this week with the arrival of France president Francois Hollande in the capital on Sunday for the Republic Day celebration on Tuesday (Jan 26).

Prime Minister Narendra Modi and Hollande are expected to finalise the sale of the latest Rafale fighter jets to India.

Last year, United States president Barack Obama was the guest-of-honour at the celebration.

Meanwhile, checks at government buildings along the Rajpath boulevard and famous India Gate, location of the parade, were closed to public.

More paramilitary troops were being deployed at major roads leading to city centre.

Security checks at airports, railway stations and shopping complexes have also been beefed up with travellers by international flights strictly reminded to check-in three hours prior to their departures.

There was also a report of a missing official SUV belonging to a police officer in city of Noida, about 50 kilometres from New Delhi, which has authorities worried about a Pathankot style attack.

In the Jan 2 Pathankot air force base attack in Punjab, armed terrorists had hijacked the four-wheel drive of a police officer and the vehicle was used in the attack.

Seven Indian security personnel and six terrorists were killed in the incident.