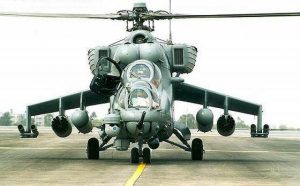 The government of India is mulling to buy more Mi-35 gunship helicopters for the Afghan Air Force in a bid to bolster the fighting the capability of the Afghan national defense and security forces, it has been reported according to khaama.com.

The proposal comes after a request from the Ghani government, including during a visit to Delhi by Afghanistan’s National Security Advisor Hanif Atmar in October, and follows several visits to Moscow by Indian officials to discuss the logistics, according to a local news outlet, The Hindu.

An Indian Defence Ministry team is also expected to travel to an East European country, possibly Serbia or Ukraine, that still operate Soviet-era aircraft, and an Afghan defence team is expected in Delhi “shortly” to follow up on the discussions, a diplomat told the paper.

The Afghan officials have not formally commented in this regard so far but Kabul has long been urging New Delhi to provide support to the Afghan security force as the country has invested billions of Dollars in reconstruction so far.

The new reports regarding New Delhi’s intention to buy gunship helicopters for the Afghan forces emerge as the United States Department of Defense, Pentagon, earlier said the United States welcome additional support by the Indian government to Afghanistan, noting the country’s contribution to the reconstruction of Afghanistan.

In its latest report, Enhancing Security and Stability in Afghanistan, Pentagon said Pentagon called India as Afghanistan’s most reliable regional partner and the largest contributor of development assistance in the region.

The report further adds that this assistance includes civil development projects such as the Afghanistan-India Friendship Dam and the Afghan parliament building.

According to Pentagon, India provides significant training opportunities for Afghan officers and enlisted personnel and has frequently offered to increase its burden sharing for Afghanistan. Approximately 130 Afghans travel to India each year to attend various military academy and commissioning programs.