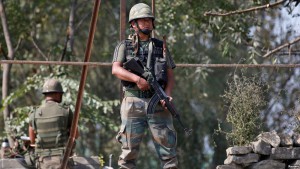 India’s army said Thursday that it launched “surgical strikes” against suspected militants along the border with Pakistan, but Islamabad rejected the claim, calling it an incident of cross-border firing.

The strikes come in the wake of a militant attack on an Indian army base earlier this month in Kashmir that killed 18 soldiers and which Prime Minister Narendra Modi said would not go unpunished.

India’s Director General of Military Operations, Ranbir Singh, told a news conference Thursday that the strikes were carried out to thwart terrorist teams positioned on launch pads along the disputed Kashmir border.

He said that significant casualties were caused to “these terrorists and those who try to support them”.

“The operations were basically focused to ensure that these terrorists do not succeed in their design of infiltration and carrying out destruction and endangering the lives of our country,” according to Singh.

The Indian army official said he had informed his Pakistani counterpart about the operation, which has ended.

Soon after New Delhi’s announcement, Pakistan’s military said in a statement “The notion of surgical strike linked to alleged terrorists’ bases is an illusion being deliberately generated by India to create false effects.”

The Pakistani army said two of its soldiers had been killed and nine wounded in the exchange of fire across the volatile border, which it accused India of provoking.

The cross border firing along the border is reported to be continuing.

Referring to India’s announcement of “surgical strikes”, Pakistan’s foreign ministry warned that such “irresponsible statements can only escalate the already fragile security situation in the region.” In a statement, it accused India of escalating tensions at the border to divert attention from the situation in Indian Kashmir, which has witnessed widespread civil unrest.

Representing a significant departure from India’s traditional policy of what is known as “strategic restraint”, analysts in New Delhi say the army strikes could ratchet up tensions along the Kashmir border. Although there have been calls in the past to take out terror camps of Islamic militant groups that India says are situated on the Pakistani side, the possibility of a military escalation between the nuclear-armed had held Indian leaders back in the past.

The attack on the Indian army base had led to widespread calls for retaliation both from the public and officials in Prime Minister Modi’s Bharatiya Janata Party.

Speaking after the army announced the strike against terrorists, Information and Broadcasting minister Venkaiah Naidu said that after the attack on the army base, “people of India were outraged and Prime Minister Narendra Modi had reassured the nation that such condemnable attacks will not be tolerated anymore and befitting measures will be taken to ensure the safety and security of the country”.

India has also launched efforts to diplomatically isolate Pakistan for its alleged support of Islamic terror groups. A South Asian summit due to be held in Islamabad in November could be the first casualty. Along with New Delhi, three other countries – Bangladesh, Afghanistan and Bhutan have pulled out of the meet citing cross-border terror as a concern.

While New Delhi blamed the September 18 attack on the Indian army base on Pakistan-based militants, Islamabad denied any role and called it an attempt to deflect attention from alleged human rights abuses by Indian security forces in Kashmir.

Claimed by both nations, Kashmir is divided between India and Pakistan, and has been the trigger for two of their three wars.