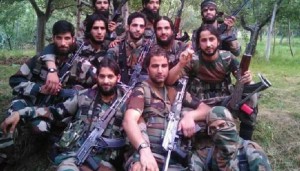 In a major sucess, Jammu and Kashmir Police today busted a Hizbul Mujahideen module that was operating in North Kashmir’s Bandipora district and arrested four Over Ground Workers (OGWs). The module had planned a massive attack on VIP rallies, police and security forces’ installations.

According to J&K Police, three of the arrested OGWs are residents of Pazalpora and one hails from Kralpora. Sources in Police told Mirror two of the OGWs were desperate to join militancy and had received weapon the other two OGWs. “The arrested OGW’s were hatching conspiracy to kill a few prominent persons from North Kashmir, which included grenade attacks on VIP rallies and attacks on police and security forces. Arms and ammunition were also recovered from them,” the police source said.

A top police official told Mirror that the busting of this module is a major setback to Hizbul Mujahideen in Kashmir Valley, given that the militant outfit is in the process of reviving its network in North Kashmir. The police produced all the four arrested OGWs before the court, which extended their remand.