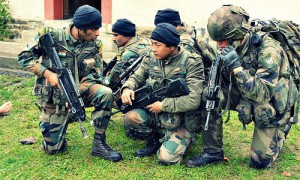 Named as Shakti-2016, India and France launched today an eight- days joint military exercise in the western state of Rajasthan, focused on the anti-terrorist and anti-guerrilla fight.

A statement from the Indian Army states that the French contingent is made up of 56 soldiers that belong to the 35A Infantry Regiment of the Seventh Armored Brigade of the European nation, deployed in the past in Afghanistan and Iraq.

Nationally, added the statement, troops of the second battalion of Garhwal Rifles are also involved.

The maneuvers include target and combat practices as well as tactical operation, which are an important step to exchange experience between both armed forces, highlighted the text.

The exercise, the third of its kind between the two countries, will end in an exercise to clear a rural and an urban area of terrorist.