You are here: Home / West Asia / India and Islamic State: everything under control? 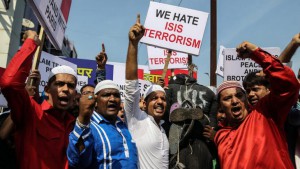 India, the country with the largest Muslim minority, is forever issuing assurances that it remains unaffected by the deadly threat posed by IS. Only time will tell, however, whether the escalating confrontation seen by many as a symbolic struggle between the West and Islam continues to give the subcontinent a wide berth. An essay by Ronald Meinardus

The Middle East has traditionally played a minor role in India’s foreign policy, New Delhi consistently avoiding being dragged into conflicts there. More than once, the Indians have shown the West the cold shoulder when asked to participate directly in the military struggle against Islamic State.

On the one hand, Indians are committed to the noble principle of non-interference, but the South Asian superpower also has a much more mundane motive for staying out of Middle East politics: concern for the physical well-being of the large Indian diaspora there.

Around seven million Indian “guest workers” earn their living in the Gulf region, three million of them in Saudi Arabia alone. Their protection is thus a priority for Indian policymakers. One means to achieve this end – it is hoped – is to refrain from involvement in military campaigns.

At least rhetorically, however, New Delhi has now bowed to sustained pressure coming from Washington and has revised its stance on participation in an international IS front. “We will take part if there is a UN resolution and (the mission) is carried out under a UN flag,” said India’s defence minister Manohar Parrikar.

That this positioning will not necessarily hold up was demonstrated only a few hours later, when the spokesman for the Indian foreign ministry qualified the words of the minister by saying he was speaking only of “a hypothetical situation” and stating that New Delhi would deal with this issue when the time came.

That is not to say that the Indian government takes the dangers posed by Islamist terrorism lightly. Ever since IS chief Abu Bakr Al-Baghdadi declared in the summer of 2014 that India was part of the sphere of influence for the envisaged world caliphate, alarm bells have being going off in the headquarters of the subcontinent′s intelligence services.

In the wake of the Paris attacks, the interior ministry published an updated threat analysis stating that the IS “has failed to establish a significant presence in India”. Nevertheless, it also pointed out that the terrorist militia has already managed to radicalise several Indian young people. According to the report, from which the local media quoted extensively, this now opens up the risk of IS-sponsored terrorist acts in India.

In terms of sheer numbers alone, India would seem to be a prime target for Islamist propaganda. India’s Muslim minority numbers 180 million people. Only Indonesia boasts a larger Muslim population than the subcontinent.

The concern is therefore not unfounded that these often politically and socio-economically marginalised people could end up being targeted by the Islamist terrorist militia’s recruitment and attack strategies.

The theme is given broad coverage in the Indian media. Hardly a day goes by without the newspapers reporting from the local anti-terror front, sometimes in great detail. The editors often rely solely on unnamed intelligence sources, so some scepticism is certainly warranted.

If we are to believe what the reports contend, however, India’s authorities have a very good idea of what the IS and its agitators are up to. A total of 23 Indian young people have allegedly joined the militia as fighters in the Middle East, six of whom have lost their lives in combat. One of these Indians broke ranks and returned home full of regret.

What is astonishing is how the media never fails to release the names of the people involved, even publishing interviews with worried relatives. The methods used by the Islamists to attract Indian youths for jihad in the Middle East are well documented.

The main tool is said to be social media, the use of which has exploded in India, even among the poorer social strata. The recruiter contacts a potential candidate via digital services such as Twitter, Facebook or WhatsApp, targeting young people who have attracted notice with their “likes” or “re-tweets” of pro-Islamist comments. The next step is for the two sides to talk. After contact has been established, practical questions must be addressed such as travel to the Middle East crisis region and initiation into the terrorist organisation when the recruit arrives.

India’s IS strategy is thus spearheaded by keeping close watch over the Internet, in particular the countless strands of communication in the social media. New Delhi works closely with foreign intelligence services in this area – co-operating simultaneously with the USA, the Israelis and the Arabs.

The Indian government boasts that, as a result of this pre-emptive digital defence strategy, 150 Indians now have their names on file due to pro-IS communication on the internet, forming a “black list”. These “endangerers” are under observation and are not permitted to leave the country. According to media reports, in some 30 cases the authorities have been able to prevent “endangerers” from leaving India for Syria or Iraq.

In comparison with other countries, the number of Indian IS recruits is negligible. The monitoring described here is surely partly responsible for this fact. Also important is that for the great majority of Indian Muslims the propaganda messages of “Islamic State” apparently fall on deaf ears. For most Indians of Muslim faith, the Arab world is a world apart, with few direct connections. Their attention and political interest is more likely to focus on problems at home.

So does India really have the deadly threat posed by IS under control? If we are to believe the official assurances, we can feel justified in answering in the affirmative. But only the future will tell whether the country with the largest Muslim minority in the world will remain unaffected in the long term by an escalating confrontation that many have long since stylised as a global struggle between the West and Islam.