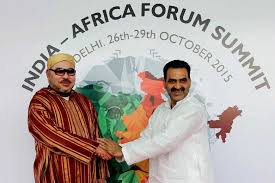 The third India-Africa Forum Summit (IAFS) being held in New Delhi may be under a high-level threat from Boko Haram and Islamic State (Isis) militants, Indian intelligence agencies have warned. Around 40 heads of state of 54 African nations participating in the event are at risk from what intelligence inputs claim could come-off lone wolf attacks targeting diplomats and politicians.

In view of the “very high” threat issued, more than 25,000 police and paramilitary personnel are working with African security agencies to ensure safety of the dignitaries. Additionally, police and the foreign registration office are keeping a tab on the African nationals who have arrived in New Delhi over the past week, reported the Times of India.

Until now, Isis has not carried out any terror act in the country. However, the radical organisation’s propaganda has made inroads into the country, with some cases being reported of youth wanting to join the terror outfit. Hence, intelligence agencies have prepared a list of those they suspect of being radicalised by Isis and are monitoring them.

Further, Isis flags were flashed in the Kashmir valley in northern India, indicating that some rebel elements supported the extremist group’s ideology in the troubled state. Additionally India’s eastern neighbour, Bangladesh, recently witnessed the death of two foreign nationals and a mosque attack on Shia Muslims, which was claimed by Isis militants.

As for Boko Haram, African countries have come out strongly against the extremist group, which is creating havoc in Nigeria. And security agencies are not taking any chances, since Boko Haram pledged allegiance to Isis earlier this year, and a majority of the forum will be dominated by the African heads of states.

The third edition of the four-day IAFS summit, which is taking place between 26 and 29 October, allows consultations between governments of 54 African nations and India to boost bilateral partnerships.