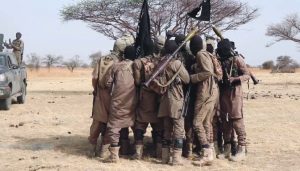 As the world focuses on the fight to curb COVID-19, Boko Haram has stepped up attacks in west Africa. Islamists affiliated to the so-called IS also claimed new territory in Mozambique. There are fears of more attacks, like reported by allafrica.com.

Nigeria remains on high alert after security experts warned that terror groups could take advantage of the global focus on the pandemic and launch attacks, especially in the Lake Chad Basin. They further warned that African countries with scarce resources are at greater risk now that they have a new frontline on their doorstep – the battle to stem the flow of COVID-19.

The COVID-19 global infection is now more than to 1.5 million in 184 countries on Thursday, April 9, according to Johns Hopkins University.

Africa has so far not been hit as hard as other continents, according to official figures. But the continent saw a sharp increase in the number of confirmed cases between the last week of March and the first week of April, climbing from around 1,000 to over 8,000.

The so-called “Islamic State” (IS) and al-Qaeda released mixed statements last week. On the one hand, IS urged its followers to repent and take care of themselves because the coronavirus was a punishment from God for non-Muslims, the news agency AP reported. It also urged its followers to show no mercy and launch attacks in this time of crisis, according to AP.

Al-Qaeda’s statement, on the other hand, called on non-Muslims to use their time under lockdowns to learn about Islam. Both statements are in total contrast to the guidelines set by the World Health Organization aimed at preventing the further spread of the coronavirus.

IS and al-Qaeda strategic alignment

Chad suffered its deadliest toll in its battle against terrorism on March 23, when a Boko Haram faction allied to al-Qaeda attacked an army base on the Boma Peninsula, in the Lake Chad region, killing 92 heavily armed soldiers.

Chadian President Idris Deby visited the army base a day after the attack and said: “I have taken part in many operations, but never in our history have we lost so many men at one time.” The Sahel country had recorded 9 cases of COVID-19, as of Tuesday.

A terrorist organization in Mozambique, allegedly allied to IS, ransacked the strategic port city of Mocimboa da Praia on March 24 and designated it a part of the so-called caliphate.

The Washington Post had reported in late February that al-Qaeda and IS, who are fighting each other in the Middle East, “are working together to take control of territory across a vast stretch of West Africa.” The Post cited sources in the United States and West Africa.

“Fighters appear to be coordinating attacks and carving out mutually agreed-upon areas of influence in the Sahel, the strip of the land beneath the Sahara desert,” according to The Post.

Following the attacks, the Multinational Joint Taskforce (MNJTF), which includes Nigeria, Niger, and Chad, launched a major operation at the Tunbuns islands of Lake Chad against Boko Haram and ISWAP. At a press conference in Abuja, a spokesperson for the Nigerian army Brigadier General Bernard Onyeuko said that “these heinous acts necessitated the contiguous nations of the Lake Chad basin to jointly launch this massive onslaught on the terrorists across the common borders.”

The operation is an addition to the ongoing Operation Lafiya Dole, in which Nigerian troops are battling the terrorists in the northeast.

Also, two Egypt military official told AP that there is an increase in IS activities in the restive northern part of the Sinai Peninsula but said its forces foiled at least three major assaults.

Security analyst Bulama Bukarti wrote in a blog post for the London-based Tony Blair Institute for Global Change that there are already “indications that jihadi groups on the continent try to take advantage of the crisis to unleash violence and recruit members.”

“Already stretched resources currently earmarked for state security forces fighting violent extremists and the provision of healthcare and humanitarian supplies to communities in need may have to be diverted to deal with a widespread outbreak,” Bukarti wrote.

The increased attacks also come amid contradictory statements that the United States could cut down troops in West Africa. New York Times journalist Eric Schmitt wrote: “The Trump administration is split over how to combat terrorists, support allies and thwart global competitors in West Africa. And the mixed messages out of Washington are confusing allies in Europe, who are deeply committed to security in Africa, as well as to military partners on the continent.”

“While we might like to pause our operations in Somalia because of the coronavirus, the leaders of al-Qaeda, al-Shabaab, and ISIS have announced that they see this crisis as an opportunity to further their terrorist agenda,” the Military Times news website quoted Gen. Stephen Townsend.

“So we will continue to stand with and support our African partners,” he added. Townsend also claims that a US airstrike killed a high-ranking al-Shabab leader last week.

Additionally, the US has increased airstrikes against al-Shabab after the terrorists carried out a brazen raid on US airbases in Manda Bay, Kenya, and Baledogle in Somalia – both in January. Three Americans, including a soldier, were killed in the Manda Bay attack.

However, the high presence of foreign troops in West Africa has failed to halt the militants, who are carrying out frequent and sophisticated attacks against local army bases and villages in Mali, Niger, and Burkina Faso.

According to Schmitt, the Pentagon is “weighing deep US troop cuts on the continent, closing a new $110 million (€108 million) drone base and ending aid to French forces battling militants who are surging in Mali, Niger, and Burkina Faso.”

The US has about 1,400 troops in West Africa, providing intelligence and drone support to local and French forces on the ground. A further 4,400 American troops are deployed in East Africa,to support African Union troops fighting al-Shabab.

According to security analyst Bulama Bukarti, terrorist organizations could exploit the “humanitarian vacuum” created by the coronavirus outbreak.

“These groups might increase service provision, stepping in where the state is failing in medical, water, and food provisions to build popular support for their cause and proto-states.

“If the spread of COVID-19 across Africa reaches anywhere near the levels of China, Europe, or the United States, panic, chaos, and confusion will ensue,” he wrote on his blog.