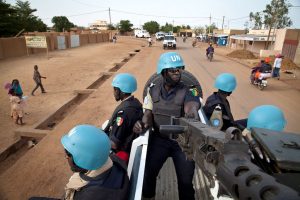 Insecurity is spreading in Mali and across its borders as the number of militant attacks rose and new armed groups emerged over the past year, underscoring the need for military cooperation in West Africa, according to the United Nations Secretary General according to bloomberg.com.

Violent Islamic extremists carried out 201 attacks against the Malian security forces, UN peacekeepers and French troops since June last year, compared to 165 assaults in the previous 12 months, UN Secretary-General Antonio Guterres said in a report to the Security Council published Thursday. Mali’s central regions registered a 42 percent increase in attacks, at a time the UN operation in the country is hindered by a lack of armored vehicles and attack helicopters, according to the report.

“The growing spillover of instability in Mali into its neighbors demonstrates the need for enhanced regional cooperation,” Guterres in the report, referring to an initiative of five West African countries known as the G5 Sahel to set up a military force by the end of this year. The plan is yet to be approved by the Security Council.

Guterres also urged the Security Council to “prioritize and strengthen the political and security tasks” of the UN peacekeeping mission in Mali.

Mali’s government must consult with stakeholders before submitting a revised constitution to a nationwide referendum in July and speed up the implementation of the 2015 Algiers peace accord, Guterres said in the report. “Failing to do so could seriously jeopardize the hard work and achievements made thus far, with dire consequences for the country and the region,” he said.

Mali has been gripped by violence since ethnic Tuareg rebels began an insurgency in the north of the country and joined forces with Islamist militants in 2012. The West African nation experienced its deadliest attack yet in January, when a bomb hidden in a vehicle killed almost 80 people inside a military camp in Gao.

The UN has more than 13,000 military personnel in the country.