You are here: Home / MidEastGulf / In wake of Ankara attack, Turkey targets PKK positions in Iraq and Syria

In the wake of the bomb attack in Ankara, Turkey has carried out airstrikes on PKK positions in Iraq. Turkey claims two bombers were involved in the car bombing – one a Syrian and the other a PKK militant. 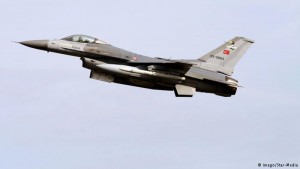 Turkish warplanes carried out airstrikes on Kurdistan Workers Party (PKK) camps in northern Iraq late on Wednesday, according to security sources. Senior commanders were believed to be among up to 70 people hit in the Zap, Avasin and Haftanin camps.

Following a car bomb attack in Ankara that left 28 people dead on Wednesday, President Recep Tayyip Erdogan said, “Turkey will not shy away from using its right to self-defense at any time, any place or any occasion.”

Without specifying the form of the retaliation, Erdogan’s office issued a statement saying, “We will never take a step back in our rightful struggle against all terrorist organizations.”

Turkish artillery shelled positions of Kurdish fighters in Syria for the fifth day in a row on Wednesday. Erdogan said Turkey would never accept the creation of a Kurdish stronghold in northern Syria, adding that there was “no question” of Ankara ending its shelling.

In a separate incident, at least six people were killed in an alleged PKK attack on a military convoy in southeast Turkey on Thursday.

A Syrian national, identified by his fingerprints, has been accused of carrying out Wednesday night’s bombing in Ankara. Salih Necar was thought to have entered Turkey with refugees from Syria. The car used in the bombing had been rented out in the western Turkish city of Izmir about two weeks ago.

Turkish Prime Minister Ahmet Davutoglu claimed during a news on Thursday that there had been two bombers involved in Wednesday’s Ankara blast.

“The attack was carried out by the PKK together with a person who snuck into Turkey from Syria,” Davutoglu said. Authorities have detained nine people in connection with the attack, he added.

PKK leader Cemil Bayik was quoted on Thursday as saying he did not know who was behind the bombing.

“We don’t know who did this. But it could be an act of retaliation for the massacres in Kurdistan,” Cemil Bayik told the Firat news agency, which is seen as close to the PKK.

“We deny any involvement in this attack,” Saleh Muslim said.

Up to 2,000 rebel fighters have crossed the Turkish border back into Syria in the last week, according to the rebel group that runs the border-crossing of Bab al-Salam.

“We have been allowed to move everything from light weapons to heavy equipment mortars and missiles and our tanks,” Abu Issa, a commander in the Levant Front, told Reuters news agency.

There were also reports from the Syrian Observatory for Human Rights of hundreds of militants crossing the Turkish border into Syria on Wednesday. They are suspected of returning to Syria to help rebels in the face of gains made by Kurdish forces.

The UK-based observatory reported that at least 500 rebels crossed looking to make their way to Azaz “to help the insurgents in the face of gains made by Kurdish forces in the north of the province,” said Rami Abdel Rahman of the observatory.

The Kurdish fighters, who have the support of the United States, have taken advantage of Russian airstrikes to take control of territory near the Turkish border in recent weeks.

Meanwhile, trucks carrying aid arrived in four besieged towns in Syria on Wednesday in what the United Nations described as a test for Syria’s warring sides ahead of a truce planned to come into force on Friday.

Media reports said three trucks entered Madaya, which is besieged by government troops, in Damascus province and the UN’s humanitarian coordinator for Syria, Yacoub El Hillo, said aid trucks had reached the Shiite towns of Fuaa and Kafraya, in northwestern Idlib province, which are surrounded by rebels.

“Dozens of trucks will follow” for Madaya, Fuaa and Kafraya, El Hillo added. “We are about the finish the process.”