You are here: Home / Analysis / In today’s wars, final victory is no longer possible 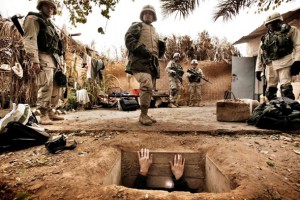 When President Barack Obama laid a wreath in Hiroshima’s peace park, his visit commemorated a day when “death fell from the sky and the world was changed”. It also summoned memories of an era when wars could be ended and final victory achieved with one devastating stroke.

How different are the realities of today? We live in a time with no definitive victories, no moments when wars come to a conclusive end – and no assurance that a military endeavour will not have to be repeated.

Col Muammar Gaddafi was toppled with the help of British air power in 2011. Yet our special forces are back in the Libyan desert and the Royal Navy is about to send a warship to patrol the North African coast.

The last British soldiers supposedly left Iraq in 2009. Today, about 1,000 British military personnel are back in the Middle East and the RAF is bombing targets in Iraq almost every day. The last Western combat units left Afghanistan in 2014, but a Taliban revival followed close on their heels, causing the return of thousands of American troops.

The easy conclusion would be to write off those interventions as failures: instead of achieving victory, they brought only temporary gains and so they should never have happened in the first place.

But the truth may in fact be worse. In countries like Iraq, Libya and Afghanistan, final victory may be impossible and temporary gains the best that can be achieved. The choice is not between permanent or temporary improvement, but between transient gains – or no gains at all.

The problem is that public expectations are still influenced by folk memories of 1945. In the space of a few weeks, the Russians marched into Berlin and two atom bombs eviscerated Hiroshima and Nagasaki. After those terrible blows, the Second World War ended on May 8 in Europe and August 15 in Asia – and never flared back to life.

But when was the last time any country achieved a final victory comparable to 1945? One rare occasion was on June 14 1982 when the Argentine forces occupying Port Stanley flew white flags and the Falklands War came to a sudden end.

On February 28 1991, Saddam Hussein’s abject withdrawal from Kuwait also seemed to mark a moment of conclusive victory. But, as it turned out, the ceasefire signed in a tent by General Norman Schwarzkopf and an obscure Iraqi commander served only to begin a decade of sanctions, no-fly zones and cat-and-mouse hunts for weapons of mass destruction, before another war was launched to rid the world of Saddam in 2003. And that conflict has raged, in one form or another, ever since.

In truth, final victories were only possible when states fought one another with conventional armies, normally for control of territory. Today’s conflicts do not fit this neat pattern. Our enemies are not states but guerrilla movements or terrorist networks, motivated by pitiless ideologies, who do not accept defeat when they lose territory, but simply switch tactics and carry on their struggle by other means. Saddam’s version of an Iraqi state, once destroyed, simply morphed into an underground terrorist movement.

The victory of 1945 became final when Germany and Japan were reborn as stable democracies. Britain’s ultimate success in the Falklands was achieved not on Goose Green or Mount Longdon or any other battlefields near Port Stanley but on the streets of Bueno Aires, where Argentina’s junta was toppled in 1983. The downfall of the generals also removed the possibility that another Argentine government might send a second invasion fleet to conquer the islands. In short, conclusive victories are accompanied by political settlements that guarantee peace.

Today, settlements of this kind may be impossible. The likes of the Islamic State of Iraq and the Levant (Isil) do not have any coherent or negotiable goals. In Iraq, Afghanistan and Libya, the very idea that these countries should exist as unified entities is rejected by many of their own citizens. The hard truth may be that these states are ungovernable and long-term conflict inevitable.

So the fact that our troops are back in Iraq and Libya is not a sign of failure; rather it is an inevitable feature of an era when final victory is an illusion.