You are here: Home / Analysis / In the “New Cold War”, China emulates the Soviet Union 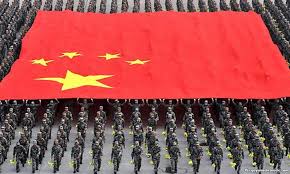 Communist China claims that its goal is to bring “peace and security to the world.” Why, then, is it preparing to establish a far-reaching military and economic partnership with Iran? Why would a country concerned with peace and security align with the world’s leading state sponsor of terror?

As the agreement states, China and Iran have a shared geopolitical outlook: “Two ancient Asian cultures, two partners in the sectors of trade, economy, politics, culture and security with a similar outlook and many mutual bilateral and multilateral interests will consider one another strategic partners”, like reported by washingtonexaminer.com.

China lies when it uses rhetoric about “peace and security”; no peace-loving country has a similar geopolitical outlook with Iran, a country that proactively undermines security in the Middle East, supports global terror networks, and wants to wipe Israel off the face of the planet.

The reality is that China wants power, world power — and there is a sinister, Soviet-style plan to achieve it.

In building strategic alliances, the Soviets used military power and territorial conquest to extend its reach beyond the Iron Curtain. China primarily expands through economic influence and exploiting our globalized system.

The country’s strategic vision is manifested in Xi Jinping’s Belt and Road Initiative, a lending project that provides China with alliances in over 140 countries under the guise of “economic cooperation.”

Targeting less-developed countries, China agrees to front the cost of infrastructure projects and data centers, knowing the governments are unable to repay the loans. In Djibouti, China built a naval base after 70% of Djibouti’s GDP contained debt to Beijing from Belt and Road Initiative projects. In Sri Lanka, China obtained a 99-year lease for a strategic military and trading port in exchange for forgiving $1 billion of Sri Lankan debt. China has partnered with other strategically located countries such as Panama, Egypt, Kenya, and now, Iran.

As Beijing has expanded its investments, it has also acquired political partners, reminiscent of the Warsaw Pact. While facing scrutiny at the United Nations for its oppressive security law in Hong Kong, 53 countries supported China. Forty-three of them were signatories to the Belt and Road Initiative. Xi’s “investments” paid off.

In 2008, the Chinese Communist Party developed its “Thousand Talents Program,” which uses strategically placed academics to bring research back to China. Its focus is not just military technology, but also medical research, technological advancements, and infrastructure plans. Most recently, U.S. and U.K. intelligence reports outlined communist China’s intention to steal or sabotage research into a coronavirus vaccine. And over the past five years, Chinese researchers have stolen American naval technology for submarines, $1 billion worth of petroleum-related trade secrets, and American cellular and telecommunications technology.

There is no question that our posture with Communist China constitutes a “New Cold War.” Chinese aggression against India and on the South China Sea reminds us that Beijing has the same taste for territorial expansion as Soviet Russia. And Xi’s 2017 address to the Chinese Communist Party makes clear that he doesn’t want China to merely compete in global affairs — he wants to set the terms of debate and isolate the United States and our allies.

As I stated in February at the Hudson Institute, “Communist China does not want to join the community of nations so much as it wants to rule it. The result, whether we want to admit it or not, is a new Cold War.” No debate is needed, and the U.S. must respond appropriately.

Stop buying anything made in China. De-list Chinese companies from stock exchanges. Re-shore the supply chain and support American jobs. Indicate products’ place of origin for online shoppers. Refuse to publish Chinese propaganda in newspapers. Reevaluate relationships with Chinese researchers at universities and hospitals. Cancel travel plans to China. Cut ties with Confucius Institutes at universities. Move the 2022 Olympics Games out of Beijing.

I have been sounding the alarm in the Senate on these issues, and I am thankful the Trump administration is working towards a proactive, strategic approach to combat the Chinese threat. But everyday people can step up now and treat China like the adversary it is.