You are here: Home / MidEastGulf / In the Islamic State’s new elementary schools, history is literally rewritten 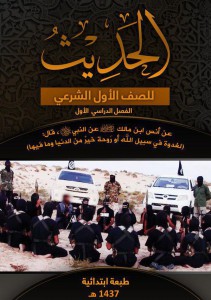 At a handful of elementary schools in Syria, children are learning history and religion from a textbook that depicts, on its cover, America’s Statue of Liberty with its head blown off. In its place emerges the Islamic State’s black flag.

The Islamic State—also known as ISIL or ISIS—began running elementary schools in the Deir e-Zor countryside in Syria last week, according to independent journalism outlet Syria Direct, which gathered the information from local teachers and opposition media. Photos of the schools’ textbooks, posted to Twitter by apparent supporters of ISIL and believed to be real by at least two experts interviewed by Fusion, indicate that dozens of subjects are being taught—presumably sanitized and approved in accordance with ISIL’s mission.

The schools aren’t only for ISIL supporters. Parents in some parts of Deir e-Zor, in eastern Syria, are being forced to send their children to the new elementary schools under threat of arrest, claims Deir e-Zor is Being Slaughtered Silently, a local media campaign.

According to the site, students wear Pakistani-style uniforms of long-sleeved shirts and trouser. Girls—who are segregated from boys with separate classes—are only taught until the fourth grade.

Customized textbooks reportedly teach a variety of subjects, including Arabic, math, grammar, physics, Islamic manners, composition, and Qur’an interpretation, as well as “English for the Islamic State.” But the material seems to be strictly controlled.

According to Syria Direct, one former elementary school teacher reported that a colleague was lashed 30 times for failing to stick to ISIL’s particular narrative of history. “He had drawn a map of Syria and written on it the names of neighboring states,” Abu Abdullah said. “According to the Islamic State, there are no other states besides theirs.”

ISIL has already been providing several public services in Syria. Still, the operation of elementary schools, complete with packaged educational materials, signals just how deep the organization has put down roots as a governmental entity. The new curriculum comes after ISIL banned several subjects like philosophy and chemistry in some northern Syrian schools last year.