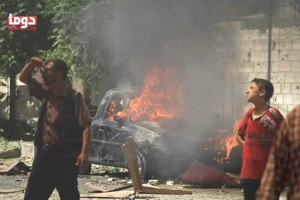 Two car bombings, half an hour apart, killed 26 people on Monday in a predominantly Kurdish city in northeastern Syria, the country’s state-owned media and activists reported, in an attack swiftly claimed by the Islamic State group.

Among the victims of the explosions in the city of Hassakeh were a woman and her two children and several Kurdish fighters, according to the Britain-based Syrian Observatory for Human Rights.

The Islamic State group said in a statement that its two suicide bombers targeted a gathering of Kurdish fighters and pro-regime militias.

The bombers struck in two different Hassakeh neighborhoods. The state news agency SANA said at least 21 died in the bombing in the busy Mahatta neighborhood. Bodies were pulled from under the rubble of a collapsed building, the agency said, adding that the number of victims was likely to rise.

The second bomber detonated his explosives-laden vehicle in Khashman district on Hassakeh’s northern outskirts, killing five people, including the woman and her children, SANA said.

Syrian state TV broadcast footage from the two-story building that collapsed in the al-Mahatta explosion, which also left a large crater in the street. A man is seen holding a victim and weeping. The TV later said that authorities dismantled two other car bombs in the province.

In a statement posted on social media, the Islamic State group said two of its fighters blew themselves up, one at in a graduation ceremony for Kurdish cadets and the other hit a base for the pro-government militia.

Hassakeh has been scene of repeated attacks by IS militants. Syrian Kurdish fighters are largely in control of the city, which has pockets of government forces. IS militants have been battling the Kurdish forces and government troops in the province for months.