You are here: Home / MidEastGulf / In Syria, there is a new kind of war against Islamic State 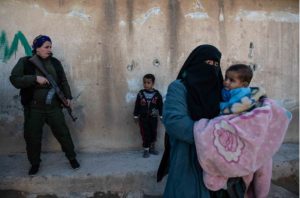 In the early morning darkness, a militiawoman loosens her braid under her balaclava before grabbing a rifle and taking up a frontline position with a group of the Anti-Terrorist Units (known by their Kurdish acronym YAT).

This is a mixed force of men and women who were partially trained by the US Marines, and which is now leading a broad “humanitarian and security” operation against sleeper cells of the Islamic State (ISIS) hiding among the sea of tents at Al-Hol, the biggest detention camp for ISIS family members in northeastern Syria.

It is sometime before dawn on Sunday. Backed up by small tanks, 5,000 heavily armed members of the Syrian Democratic Forces (SDF, made up of Kurdish-Arab militias allied with the international anti-ISIS coalition) have already surrounded the camp, where over 64,000 people, of whom 67% are minors according to the United Nations, are packed into an area barely covering three square kilometers. The SDF is in charge of the detention camps in northeastern Syria and also oversees the YAT units, which operate on the front lines.

It’s been two years since the defeat of the self-proclaimed ISIS caliphate in Syria – and 10 years since the start of the civil war in that country – and the strategy in the anti-terrorist fight has changed: the focus is now on the offensive against sleeper cells. The goal of the operation is to arrest the 500 to 1,000 jihadists who live inside the camp, and to confiscate weapons and material used by the group to conduct attacks in recent months. These terrorist acts have raised the alert about an ISIS reorganization over the ashes of the feared caliphate despite the conditions of captivity.

“Over 47 people have been killed this year at Al-Hol,” explains SDF spokesperson Kino Gabriel, speaking on site. There were 20 homicides in 2020, and the victims, both male and female, were variously shot, stabbed, stoned and even beheaded, following the death sentences issued by the religious courts set up by ISIS inside the camp.

The YAT group poised for attack outside the camp is led by a militiawoman who goes by the nom de guerre of Roj and who looks around 30 years old. Her unit is one of the first to enter Al-Hol; its 40 to 50 members take up their positions and fan out between the tents before ordering everyone out. They keep their cool but they also keep their fingers on the triggers of their guns in case any member of an ISIS sleeper cell responds with bullets or a suicide attack. The silence is broken by the sound of crying children as the camp women emerge from behind the blankets that cover the entrances to the tents. In a matter of seconds, Al-Hol becomes a black-and-white picture as a sea of women in dark abayas and militias in balaclavas come and go among the white tents.

The small tanks advance over the dirt road in the section of the camp that houses slightly over 30,000 Iraqis. Among the families of jihadists who are from Iraq – for five years, the caliphate extended into that country as well as Syria, subjecting 7.7 million people to its rule – there are also 9,000 individuals who were displaced as they fled the fighting against ISIS.

With a wave of her hand, Samira orders a large group of kids to get out of the tent. A native of the Iraqi region of Ambar, she arrived at this Syrian camp two years ago. Just like 1,900 other families, she has signed up for the United Nations’ repatriation lists. “They are fighting every day,” she explains. By “they” she means those attempting to impose the caliphate’s rules in Al-Hol, and those who refuse to obey.

ISIS radicals have managed to replicate the caliphate’s structure within Al-Hol and created units of the hisba – religious police – as well as an executive unit of female squadrons in charge of meting out punishment to those who fail to follow the caliphate: executions of the kuffar (unbelievers in Arabic), beatings and tent-burning.

The SDF unit carries out its anti-terrorist operation without any major incidents, although there is a tense moment when a woman runs out with a bundle sticking out under her abaya. She is quickly neutralized, and is found to be carrying not explosives but a belt bag with money, jewels and a cellphone. Women, men and children are guided into tents where biometric data and DNA samples are taken from them.

The reactivation of the ISIS cells inside prisoner camps is just one example of how the terrorist group is striving to restore the caliphate. In the north and northeast of Syria – an area representing 20% of the national territory, with an estimated population of 2.5 million people – attacks have been on the rise. There were 28 terrorist acts in February that resulted in 30 deaths, according to the Rojava Information Center, which is made up of volunteers reporting from the field.

“The danger of a rebirth of Daesh [the Arabic acronym for ISIS] is no media exaggeration: it is a real, well-founded fear,” says SDF commander Siyamand Ali inside his office. His militia, which for the last five years has led the ground fight against ISIS in Syria, is no longer facing an army but a myriad of sleeper cells. Ali says that each cell is made up of five to 10 members. Spread across the region, they carry out isolated attacks and no longer use heavy weapons or artillery; instead, they employ explosive belts and light weapons, which are enough to create chaos among the population and keep up a war of attrition against the Kurdish-Arab militias.

South of the Euphrates river, inside an area under the control of Syria’s regular army, several thousand jihadists (there are no official figures, but the Syrian government estimated them to be between 2,000 and 3,000 a year ago) are regrouping and extending their control over part of Al-Badia, a desert region located between Deir Ezzor, Homs and Palmira. “There, Daesh levies the zakat [religious tax] on local tribes to finance itself,” says Ali. The SDF forces are trying to cut off the funding channels feeding the terrorist group from Iraq, Saudi Arabia and Turkey.

The SDF is dealing with the ISIS cells’ war of attrition while simultaneously trying to maintain security at the two detention camps for ISIS family members, Al-Hol and Al-Roj, which contain at least 66,000 women and children, and additionally watching over the prisons, where there are 15,000 jihadists. The weight of the anti-terrorist fight cannot rest solely on local authorities, insist political and military spokespeople in the area.

“The jihadists’ countries of origin must take charge of their nationals or else help maintain the camps and bring the terrorists before an international criminal court,” says Nuri Mahmud, spokesperson for the People’s Protection Units (YPG in their Kurdish acronym), which are also part of the SDF.

The SDF is seeking backing from the international community in order to preserve its autonomy from the administration of Bashar al-Assad in Damascus. “The reorganization of ISIS is not just a danger at the camps, but for the whole north of Syria and for the rest of the world,” adds Mahmud outside the gates of Al-Hol. For now, the US is keeping between 600 and 1,000 Marines deployed in the northeast to support the Kurdish forces against ISIS.

After a five-hour operation, the SDF begins searching the tents at Al-Hol. They discover a tunnel and confiscate military uniforms, computers and cellphones containing ISIS material. This is possibly evidence that the cells are coordinating with someone on the outside. The militia detains 21 people, including Abu Saad al-Iraqi, a high-ranking ISIS official who’d been wanted for a long time by the camp’s security personnel. The weapons have not been located yet, however.

“Daesh’s cells have eyes and ears everywhere,” says an official. The camp residents had been forewarned about the SDF’s operation through the Telegram cellphone app, on channels used by the jihadists. Meanwhile, soldiers with metal detectors are combing the ground in search of buried weapons. Day one of the 10-day operation is coming to an end.