You are here: Home / MidEastGulf / In Syria and Iraq, ISIS courts Sunni tribes with carrot and stick 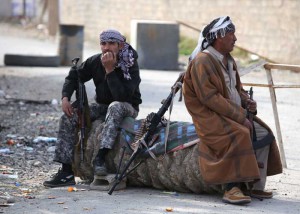 Wearing a white headscarf and a traditional black cloak, the Iraqi tribal sheikh addressed his peers: “We’re all in the same boat, the [Islamic] State is our state.”

“We say to our families that our swords and those of our brothers, the soldiers of the [Islamic] State are directed against the same enemy,” he said in a video released by ISIS, addressing some 30 tribal figures, some clutching Kalashnikovs.

The sheikh from the Iraqi city of Ramadi which fell to ISIS on May 15 was one of several tribal leaders in Syria and Iraq who have pledged their support for the extremist group.

ISIS appears to have recognized the importance of Syria and Iraq’s Sunni Arab tribes early on as it seized control of large parts of both countries last year.

Using a combination of promises and threats, ISIS is working hard to win over the tribes, analysts say, but so far with mixed results.

Both countries are home to tribes from various sects and ethnicities, but ISIS considers non-Sunnis to be heretics and has confined its outreach to fellow Sunnis.

In Syria, the country’s approximately 15 Sunni tribes account for some 15 percent of the population. In Iraq, there are no official numbers, but tribal allegiances are important in many of the country’s provinces, particularly in the west and center, as well as in northern Mosul.

Experts say ISIS has used a carrot-and-stick approach with Sunni Arab tribes in both countries, playing on local grievances but also exploiting fear.

Haian Dukhan and Sinan Hawat, authors of a study on ISIS’ relations with eastern Syria’s tribes, said three main factors were at play.

Those include “economic benefits and protection … the fear factor, skillfully exploited and mastered by [ISIS],” and grievances “which make the tribes accept or tolerate ISIS in the face of a common enemy.”

ISIS’ focus on winning over tribal support follows in the footsteps of Hafez Assad, father and predecessor of Syrian President Bashar Assad.

Under his rule, tribes were “co-opted” with official posts and subsidies and “were part of the formidable populist powers that shored up the regime,” Dukhan and Hawat wrote.

In exchange, they backed the government in confrontations with the Muslim Brotherhood movement and Kurds seeking autonomous rule.

But the relationship withered with the economic opening overseen by Bashar Assad, which meant fewer state jobs and rising resentment.

“[ISIS] attempted to fill the gap created by the withdrawal of the state. It provided an alternative structure of clientelism and patronage,” Dukhan and Hawat wrote.

The extremist group has also made the cost of defiance high.

In 2014, when the Sheaitat tribe rose up against the group, ISIS slaughtered more than 900 of its members in Deir al-Zor province.

“It subtly invites recruits either to choose the winning horse or die,” the study said.

Despite the incentives to join, and the consequences of failing to, Syria’s tribes have been divided in response to the group.

“I challenge you to find a clan or a tribe that has pledged allegiance in its entirety to ISIS or [Al-Qaeda affiliate] the Nusra Front or the rebels,” Sheikh Nawaf al-Mulhem, a tribal leader and member of parliament from Syria’s central Homs province, told AFP.

“There are individuals who support them, but they do not represent the whole tribe,” he said.

In Iraq, similar dynamics are at work, with some tribes inclined to support ISIS because of their anger at being sidelined after the U.S.-led overthrow of former president Saddam Hussein.

The U.S. postwar administration and the Shiite-led governments that have followed “expelled former soldiers from tribes favored by Saddam, designated them enemies and deprived them of status, salary and social rank,” said Hosham Dawod, a French specialist on Iraq’s tribes.

“These groups shifted from Baathism to radical jihadism and provide the military, security and political base of ISIS,” he said.

Among those who have joined the group is the Albu Ajil tribe, which is accused of participating in the massacre of up to 1,700 mostly Shiite army recruits at Iraq’s Camp Speicher last year.

As in Syria however, other tribes have resisted ISIS, including the Jughaifa. The tribe refused to turn over 150 people wanted by ISIS, and its stronghold in Haditha is one of the few areas in Anbar that has not been overrun by the militants. ISIS has laid siege to the area and directly threatened the Jughaifa in audio recordings.

Saddam Hussein’s own tribe is divided between supporters of ISIS and dissidents such as Sheikh Salah Hasan al-Nada, who has been forced to seek refuge in the Kurdish-controlled city of Irbil.

“A tribe could never join ISIS completely. If all the Sunni tribes had joined it, they would have tipped the balance of force in Iraq,” Nada said.