You are here: Home / Africa / In South Sudan’s brutal chaos, civilians in the middle 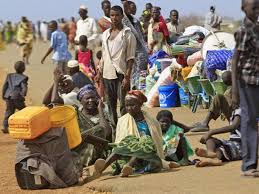 “I’m lucky to be alive,” Mary Nyandio, mother of six, told me, one recent morning in Nyal, a rebel-held town in southern Unity state, now home to tens of thousands of people internally displaced by brutal government-led attacks. Seated on a mat under a tree, she described how soldiers had captured her and about 20 other women, forced them to walk for hours carrying looted goods, then raped many of them, eventually setting them free. “We were abducted to be killed but some soldiers said let’s just rape them.”

Her experience is shockingly common, especially in Unity state, where ethnic Nuer sub-clans are now being pitted against one another — as they were during Sudan’s long-running civil war in the ‘90s– in a terrible cycle of state-sponsored violence.

South Sudan’s current war, which started in December 2013 over a political feud between president Salva Kiir, a Dinka, and former vice president Riek Machar, a Nuer, has been especially brutal, marked by ethnic targeting and massacres and widespread use of child soldiers. It has driven more than two million people from their homes, with 180,000 still in squalid UN compounds across the country.

Despite a peace deal signed in August, the Unity conflict, which began with a massive government offensive that started in April, has morphed into smaller attacks and counter-attacks. Government forces–who led the offensive in the spring—more often play a secondary role to armed youth in tracksuits. But the ongoing attacks continue to brutalize civilians and drive them from island to swampy island in search of safety and food.

Back in Juba, the bustling capital now wracked by soaring inflation and crime rates, nearly everyone I met earlier this month was pessimistic and on edge. The long-awaited opposition delegation finally arrived this week, but many still fear the resumption of major hostilities given the string of violent incidents and ongoing attacks since the peace was signed. If they are right, South Sudan could yet be plunged into another long and desperate war with untold human rights abuses and humanitarian costs, from which warlords and weapons traders will be the main beneficiaries.

When I visited Nyal in the first week of December, people were still arriving in dugout canoes, hungry and traumatized. Most had been attacked many times, even in places where they had fled seeking safety. “We hid in the grass with our nose just above the water,” recalled a pastor from Mayendit, who took his family to an island where there were multiple attacks. Community leaders alleged that in addition to the killings, rapes, destruction and looting that come with each attack, a group of 53 cattle keepers died in Leer, a government-controlled town, after locals locked them into a shipping container while looting their cattle.

Also in recent weeks, violence flared up in Western Equatoria, the pineapple state, with a string of skirmishes between disgruntled “Arrow Boys” and government forces. The area had been known for its relative calm, despite the scourge of attacks by Lord’s Resistance Army rebels in past years. The government’s response to the threat, including deploying commandos and helicopter gunships, has, as elsewhere, reportedly led to serious violations such as unlawful killing of civilians and destruction of civilian property, displacing tens of thousands of people from several areas, leaders from the area told me.

In the Bahr al Ghazal region, where government and suspected rebels fought outside Wau town in early December, the governor recently arrested 14 civil society members for signing a petition critical of army abuses of civilians. Oil-rich Upper Nile state also remains a flashpoint for more fighting and attacks on civilians.

President Kiir’s increasingly repressive and dictatorial style is salt to an open wound. Security officials have repeatedly cracked down on media, detained journalists, critics, and suspected opponents across the country, further polarizing society.  UN officials and public intellectuals have been expelled and publicly chastised for insinuating criticism. The ruling elite, now influenced by the Dinka Jieng Council of Elders, is intent on carving up the country into 28 states through barely concealed gerrymandering that has embittered other ethnic groups.

South Sudan’s leaders have the power to stop the suffering. Even as they haggle over their deal, they should immediately and publicly condemn abuses everywhere, investigate the allegations, and should stop aggravating local tensions with heavy-handed tactics and repression. Even with the opposition delegation in Juba, violence and abuses against civilians by both sides could continue. A long-overdue UN arms embargo, which the African Union has sought to prevent yet more weapons from entering the country, should still be imposed. It won’t end the atrocities, but it could  slow down an escalation and reduce senseless attacks on civilians.