You are here: Home / Europe / In Moscow, Thinni accuses West of supporting Muslim Brotherhood calls on Russia and China to support Libya 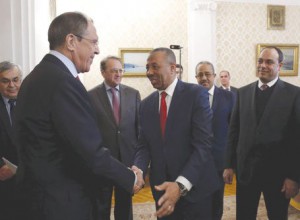 The Libyan Prime Minister, Abdullah Al-Thinni, has accused the West of destroying the balance in Libya by supporting the Muslim Brotherhood and has called on Russia and China to support his government in the UN Security Council by ensuring the weapons ban is lifted in order for it to fight terrorists, wrote LibyaHerald.

The calls was made at a meeting today in Moscow between Thinni and Russian Foreign Minister Sergei Lavrov and the Middle East and North African adviser of Russian President Vladimir Putin Mikhail Bogdanov.

“We would like to ask Russia to take the side of the Libyan people and support the restoration of state institutions and security measures in the country,” the Prime Minister said.

Thinni is visiting Moscow for three days, accompanied by Deputy Prime Minister for Security Affairs Almahdi Allabad, Foreign Minister Mohamed Dairi and Acting Defence Minister Masoud Erhouma in what is being seen as the beginning of a major shift in Libyan relations.

According to the Beida office of the Libyan news agency LANA, the discussions would serve as a fresh start in Libyan-Russia relations. The aim was to conclude a military and technical cooperation agreement with Moscow. In addition to continuing its role in training and arming the Libyan army, Thinni added that his government was seeking to reactivate “many” of the economic and investment projects approved by the Qaddafi regime.

Russian new agency Sputnik reported Thinni saying that “Western countries should take full responsibility for the chaos that Libya is facing”. Having got rid of the former regime, he reportedly accused the West of destroying the Libyan army’s capacity to fight and completely “left the people in Libya without effective government institutions”.

There had been “attempts by some international parties to circumvent the existing dialogue and the support a particular party”, he added, according to LANA.

Urging Moscow to support Libya in the UN Security Council in a resolution lifting the ban on weapons for the Libyan army, he said that Libya was now “heavily dependent” on the Russians and Chinese to enable it to fight terrorism. The Libyans could do this, but they needed the support of “friendly countries” such as Russia to arm the military and to provide intelligence support.

Libya was engaged in a war against terrorism, he said, and it could become a powerful asset for extremists if they were able to secure the country’s oil wealth. This in turn would affect security throughout North Africa and the Mediterranean.

For his part, Russian Foreign Minister Lavrov said Moscow was looking at “how best to move towards the restoration of territorial integrity” in Libya. It was now actively participating in international efforts to stabilise the situation, he added.