You are here: Home / Mediterranean / In Libya, defeating ISIS is not enough 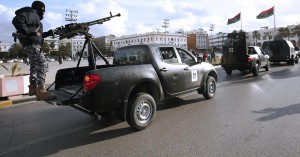 The GNA was announced in the beginning of the year after the signing of a U.N. backed political agreement in December of 2015. It was an effort to rid the country of political turmoil and unite Libya’s two rival parliaments, the General National Council (GNC) and the House of Representatives (HOR), which were operating on opposite sides of the country.

Despite the monumental achievement of routing ISIS from Sirte, there are other problems in Libya that pose greater obstacles to long term peace and threaten to plunge the country into further chaos. The unity government has yet to truly unify the country and is becoming increasingly irrelevant on the ground. While reconciling with its domestic rival appears to be the unity government’s next step, there are likely to be destabilizing consequences.

The GNA’s Gains and Setbacks

In the western part of the country, the GNA has been able to essentially dissolve the GNC, which was previously based out of Tripoli, with many of its politicians joining the State Council, a consultative institution that is part of the unity government.

In the eastern part of Libya, the GNA has essentially been absent and unable to unify effectively with the HOR. Under the U.N. agreement, the HOR now serves as the legislative arm of the unity government. The HOR has not, however, fully complied withthe terms of the agreement, according to which it was supposed to confirm a list of potential cabinet members put forward by the GNA’s prime minister, Fayez al-Saraj.

One reason why the HOR has been uncooperative is its cozy relationship with the polarizing and fiercely anti-Islamist General Khalifa Haftar. Haftar, who leads an armed group known as the Libyan National Army, is firmly against the unity government. He has even gone as far as to say he would “liberate” Tripoli, where the GNA’s headquarters is located. One of the main gripes Haftar has with the GNA is its insistence on enforcing Article 8 of the U.N. agreement. Under this article, the Presidential Council, which is part of the GNA, has control over the country’s armed forces, directly threatening Haftar’s power, position, and influence.

Tensions flared between Haftar and the GNA in September when forces loyal to Haftartook over four of the country’s strategic oil ports from a GNA-affiliated militia. This move could weaken the GNA’s power, if it is denied income from Libyan oil, which is crucial for keeping the government afloat economically.

For this reason, Haftar has an upper-hand in negotiating with the GNA, now that he controls the ports. The GNA’s prime minister has said he is open for negotiations. But, working with a divisive figure like Haftar may break the GNA’s fragile foundation—one which relies heavily on the country various militias.

Since the 2011 revolution that brought down Mummer Gaddafi, countless militias have been operating in the country. Many of these militias joined Libya Dawn, a coalition of armed groups set up to fight Haftar’s anti-Islamist faction in the summer of 2014. Although Libya Dawn is now defunct, some members of the coalition have joined forces with the GNA. These militias will likely be upset if the GNA strikes a deal with Haftar.

For example, the militias from Misrata, which are a critical component of the GNA and crucial in fighting ISIS on the ground in Sirte, will likely reject any reconciliation with Haftar. As The Economist has reported, “Battlefield successes have emboldened Misratan leaders, who have hardened their stance against General Haftar playing any role in Libya’s future. Defeating him, not [ISIS], should be the priority, say some Misratans.” The Economist piece also noted that the Misratan militias have been backing the Benghazi Defense Brigades, a group that is currently battling Haftar’s forces in Benghazi.

Similarly, in the city of Tripoli, many militias that have worked with the GNA may change their tune, if Haftar gets his way. “For now, a majority [of the militias in Tripoli] are either explicitly supportive of, or ambivalent towards, the unity government. Those in the latter category are waiting to see if their interests will be maintained under the new dispensation,” Mary Fitzgerald, a researcher for the European Council on Foreign Relations, recently wrote. Just last week, militias in Tripoli teamed up with remnants of the GNC to take over GNA buildings in an attempt to seize control from the GNA and “rescue Libya.”

If reconciliation threatens their power and does not offer comprehensive demobilization programs, these militias may decide it is against their interests to work with the GNA.

Adding to the list of possible complications, Haftar is unlikely to reconcile with the GNA, unless the latter agrees to crack down against the militias that make up its backbone and that he believes are hurting the country. “I would like to stress that Mr. Sera relies on militia and we refuse them. An army cannot unify with militias so they must be dismantled. It’s unthinkable to work with these armed factions,” Haftar said in May 2016, according to Reuters.

Chaos with No End in Sight

While ISIS is a problem, it is not the only one facing Libya. If the West declares victory against the group in the coming weeks, chaos in Libya will likely continue. The GNA faces serious challenges from the east, particularly from General Haftar. If reconciliation between the two sides does in fact go through, there will likely be push back from those militias strongly opposed to Haftar.

A Libya where chaos persists and threats to lasting peace exist from all angles mirrors the same circumstances that allowed ISIS to gain a foothold in the first place. As such, declaring mission accomplished, if and when ISIS is defeated in Sirte, will be meaningless.