You are here: Home / West Asia / In Afghanistan, a rush to recruit before NATO withdraws 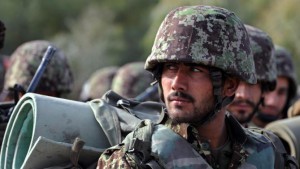 The Taliban’s annual spring offensive is underway and focused right now around the besieged city of Kunduz. Some German units are on their way to join the fight in support of Afghan forces.

“The order was given last night,” says Colonel Wolfgang Köhler, a leader with the NATO Northern Command Mission in Afghanistan.

Köhler and other officers here at Camp Shaheen, where the Afghan National Army operates, are trying to make sense of the offensive. The Taliban’s focus on Kunduz is an unpredictable choice, implying perhaps a change of strategy since northern Afghanistan has always been among the districts least affected by Mullah Omar’s guerrillas.

All this is happening just a few months after NATO began “Resolute Support Mission” (RSM), whereby it will swap its “offensive” role for a “train-advise-assist” one. The alliance also plans to drastically cut back its forces, from more than 100,000 to about 12,000.

NATO’s goal, in a nutshell, is to train Afghanistan’s security forces to defend themselves against the Taliban, which has been battling against the state for 13 years — basically since the U.S.-led invasion of the country following the 9/11 terror attacks in New York City and Washington, D.C.

Camp Shaheen, near the borders with Uzbekistan and Turkmenistan, is one of the training centers for the Afghan army, national police and local police. The plan, as its stands now, is for those forces to go it alone starting at the end of 2016.

We are hosted here by NATO troops, who take us on helicopter and airplane sojourns over the Afghan highlands and the snowy peaks that separate the area from the rest of the country. Camp Shaheen is situated near an old Soviet base and not far from a location used until recently by the CIA.

Training takes place in different facilities, including the Regional Corps Battle School, a kind of military institution where participants learn the “art of war.” The program consists of three weeks of lectures and six weeks of physical work in a training camp located behind a Soviet Panzer graveyard.

Colonel Ahmad Ullah Miakhil, the school commander, says recruitment is up. “The number of people joining the camps hasn’t decreased,” he says. “On the contrary, the recent actions of the Taliban have triggered patriotism. If the Department of Defense gives us the green light, we are ready to recruit women too.”

But the NATO mission’s unofficial 2016 deadline does create some uncertainty. “We hope to receive assistance for as long as possible,” the colonel says.

Recruitment may be up, but so too are the number Afghan security forces being killed and wounded — by 70% compared to last year. Local police are particularly vulnerable. “The national police are well equipped and improving in terms of skills,” says Interior Minister Noorulhaq Ulumi. “But the local policemen are not trained and there are also problems concerning tactical expertise and discipline. We need to improve this.”

In Herat, meanwhile, Italy’s NATO contingent remains engaged while it awaits orders to reduce and eventually withdraw. “The Italian soldiers have gained familiarity and experience. They have been carrying out training activities and given assistance to the Afghan people since the beginning of the operations,” says Gen. Paolo Ruggiero, chief of staff of RSM.

“How long will the Italian contingent be engaged?” asks General John Francis Campbell, supreme head of the NATO mission in Afghanistan, adding that he has asked Italy to maintain the current commitment for the whole season of the fighting, which means at least until October.

“After that we’ll begin a reduction of both the contingent size and the number of activities,” he says. “In case there are not any significant changes, we will finalize the withdrawal of the troops by the beginning of next year.”