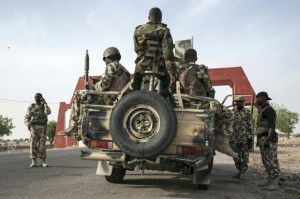 Nigeria’s security services have hailed the arrest of the leader of the Boko Haram splinter group Ansaru, Khalid al-Barnawi, saying it will lead to them to other senior Islamist commanders.

“The arrest of Barnawi is a huge success and will have a profound effect on counter-terrorism operations in Nigeria and beyond,” one security source told AFP.

“He is a known transnational terrorist and the backbone of all Al-Qaeda affiliate groups in West Africa.”

Barnawi, designated a global terrorist by the United States since 2012, was detained on April 1 with three others in the Kogi state capital, Lokoja, and found with four Thuraya satellite phones.

The phones “provided several leads” to “high-profile Boko Haram and Ansaru elements” in the capital, Abuja, Lokoja and the central city of Jos, said another source.

“This has been our biggest breakthrough against terrorism in Nigeria ever,” said a third.

“We still have other high-ranking terrorists on our radar based on the information gathered from the phones of Barnawi and his three comrades. We will rope them in at the right time,” he added.

Barnawi is certainly a major prize for Nigerian intelligence, the Department of State Services (DSS), which called him “a trained terrorist commander” who also recruited for Al-Qaeda affiliates.

He is accused of masterminding a string of kidnappings of Westerners between 2011 and 2013.

“This arrest is a major milestone in the counter-terrorism fight,” the DSS said in a statement on April 9, with an accompanying mugshot of Barnawi.

But while security analysts agree he is the most high-profile capture since the start of the Islamist insurgency in 2009, it remains unclear what effect it will have on operations on the ground.

Boko Haram has been pegged back by an aggressive fightback from the Nigerian military since January last year, losing territory and its capacity to mount conventional attacks.

President Muhammadu Buhari has gone so far as to say the militants were “technically” defeated, even if suicide and bomb attacks have continued in northeast Nigeria, Cameroon and Niger.

Yan St-Pierre, from the Modern Security Consulting group, however, said Barnawi, who trained in Sudan, Afghanistan and with Al-Qaeda in the Islamic Maghreb (AQIM) in Algeria, was “influential”.

But he was “only one” part of a disparate organisation.

His arrest “should not change much in terms of Ansaru’s terrorist activities”, St-Pierre said, as the group has not carried out many operations since 2013.

“Where things could change however is in the recent openings some Boko Haram-affiliated groups have made to AQIM in the last few months, and Khalid al-Barnawi was a huge part of that,” he said.

“His arrest will affect the dynamic of the discussions between AQIM and those he represented” at a time when the Nigerian militants were reaching out to jihadists further afield.

Ansaru, which is more ideologically aligned to Al-Qaeda, is believed to have been formed as a result of disapproval at Boko Haram’s indiscriminate targeting of civilians.

Andrew Walker, author of “‘Eat the Heart of the Infidel’: The Harrowing of Nigeria and the Rise of Boko Haram”, said shifting dynamics between the groups made the arrest’s impact uncertain.

“However, I think that any removal of key powerful charismatic figures from this situation will have the potential to scatter the remaining fighters and supporters,” he said.

With power in Nigeria dependent on individuals and patronage networks, including among the insurgents, the rebels could “break down to desperate bandits fighting each other”, he suggested.

But equally the opposite could happen and remaining fighters could rally around another charismatic rebel leader, he added.

There was confusion last month when Boko Haram leader Abubakar Shekau indicated in a video that his time in charge of the Islamic State group affiliate was running out.

Yet the following week, another video which did not feature Shekau maintained he was still in charge, and dismissed any suggestion of surrender.

The DSS said Barnawi would soon be in court “to face his charges after investigation is completed”.

Due process is seen as vital, given that Boko Haram became a more deadly force after the death in custody of its original leader Muhammad Yusuf in 2009.

“The last thing they (the authorities) want to do is to make him (Barnawi) a ‘martyr’ that could play into Boko Haram’s hands, which is something they exploit very well,” said St-Pierre.