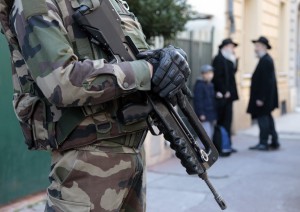 French security forces are bracing for major civil unrest and fear there could be an imminent Sept. 11-style attack, according to sources close to the country’s intelligence services.

Airlines have also been warned of a possible attack on a plane with an anti-tank missile, a source said.

After Friday’s thwarted attempt to massacre passengers on an Amsterdam-Paris train and a series of terrorist attacks and attempted killings this year, President Francois Hollande warned the nation to prepare for more violence, which is considered inevitable as the Islamist threat grows. The army has made contingency plans to win back control of neighbourhoods where residents become hostile to security forces and where guns are easily obtainable, according to the source.

“There are a lot of alienated fourth-generation immigrant kids in the suburbs and the prospect of radicalization is increasingly likely,” the source said. “The idea that attacks like the one on the train are carried out by individuals on their own is not credible. We’re dealing with highly organized networks of militant Islamists embarked on a campaign of violence and determined to intensify it.”

Kalashnikov automatic rifles – used by the train gunman and Islamist terrorists who killed 17 people in Paris in January – and anti-tank missiles are now obtainable in France, the sources said. There are fears that Islamist groups are procuring heavy weapons from Libya.

Agents of the DGSI, France’s equivalent of MI5, said they had been “lucky” to have avoided far worse incidents since the Paris Islamist attacks in January that killed 17, Le Canard Enchaine reported.

An agent told the newspaper there were fears of “an upcoming 11 September a la française where (intelligence) services are mere spectators.”

European transport ministers are to discuss more “systematic and coordinated” security checks in a meeting in Paris on Saturday, said Bernard Cazeneuve, the French interior minister.

Wednesday, the Paris prosecutor’s office confirmed that the Moroccan suspect in the foiled attack on a high-speed train was charged overnight with terrorism charges .

Ayoub El-Khazzani, 26, has denied having terrorism plans, saying he stumbled on a bag of weapons and decided to use them to rob passengers.