You are here: Home / Europe / Immigration surpasses economy as major concern in Europe and concern for terrorism increased significantly to 17% 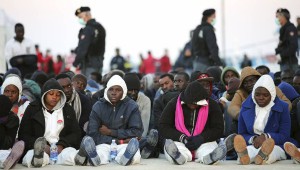 Immigration is the main concern of Europeans, ahead of economic problems and unemployment, according to a new opinion poll released by the European Commission.

A similar poll last November had the economic situation, employment, and public deficits top of the list.

Since then immigration has been a hot topic, with Italy, Greece and Malta having to deal with unprecedented arrivals by sea from Africa and the Middle East.

The latest flashpoint is in Calais, northern France, where each day hundreds of migrants attempt to sneak across to Britain via the Channel tunnel.

According to the study, released on Friday, 38 percent of respondents across the European Union cited immigration as their top concern.

This issue is “now way ahead” of the economic situation which was the foremost issue for 27 percent of the people polled, and unemployment (24 percent), the study said.

“It is the number one most frequently cited concern in 20 Member States reaching peaks in Malta (65 percent) and Germany (55 percent).”

The “expectations for the economy are improving and support for the euro remains stable,” according to the findings of the “Spring 2015 Standard Eurobarometer” poll.

Concern for terrorism at EU level has also increased significantly since November, up six points to 17 percent.

In Italy, where tens of thousands of migrants have fled aboard rickety boats across the Mediterranean, immigration was the top concern for 43 percent of people.

According to the study, the number of Europeans who say they have a positive image of the EU has risen from 39 percent last November to 41 percent in May, with only 19 percent having a negative image.

The poll was conducted through face-to-face interviews in May with more than 30,000 people across the EU’s member states and candidate countries.