You are here: Home / Europe / Immigration and terrorism continue to be seen as the most important issues facing the EU 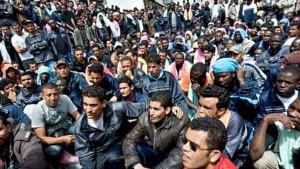 Europeans continue to see immigration and terrorism as the major challenges facing the EU at the moment, and they strongly support the political priorities of the European Commission.

Immigration and terrorism continue to be seen as the most important issues facing the EU, albeit at a slightly lower level than at the last survey in spring 2016. Support for the European Union’s priorities and policies remains strong, and has increased since spring 2016. These are two key results of the latest Standard Eurobarometer survey published today, together with the Special Eurobarometer survey “Future of Europe”.

Immigration and terrorism are seen as the major challenges facing the EU:

Asked about their main concerns, immigration remains on top of the issues facing the EU most frequently cited by citizens (45%,-3 percentage points since spring 2016). Terrorism (32%,-7) remains the second most frequently cited item. It is well ahead of the economic situation (20%,+1), the state of Member States’ public finances (17%, +1) and unemployment (16%,+1). Immigration is number one concern for the EU in all Member States, except Spain and Portugal.

Compared to the previous survey of spring 2016, support for the priority topics set by the European Commission has increased further.

– 81% of Europeans are in favour of the “free movement of EU citizens who can live, work, study and do business anywhere in the EU”. Majorities of respondents support free movement in all countries.

– On investment within the EU, 56% of Europeans agree that public money should be used to stimulate private sector investment at EU level.

Trust in the EU is higher than trust in national governments; EU citizenship stands firm

Continuing the positive trend seen in the spring 2016 survey, trust in the EU has increased to 36% (up from 33%). Trust in national parliaments and governments has also increased but remains below trust in the EU.

38% of Europeans have a neutral image of the EU, a proportion that has remained unchanged since spring 2015. At 35%, the positive image of the EU has gained some ground, while the negative image has declined (25%).

Four in ten Europeans consider that their voice counts in the EU, just below the peak of 42% recorded in spring 2014 and spring 2015.

67% of Europeans feel they are citizens of the EU.

The Treaty of Rome is seen as a positive event in the history of Europe by 69% of Europeans. This view is shared by majorities in all Member States.

Future of Europe survey: two thirds of Europeans see the EU as a place of stability in a troubled world.

66% of Europeans agree that the EU is a place of stability in a troubled world. A majority of respondents in all Member States share this view.

60% of Europeans think that the European project offers a future perspective for Europe’s youth.

82% of Europeans agree that free-market economy should go hand-in-hand with a high level of social protection.

More than six in ten Europeans think that there should be more European-level decision-making in a range of areas. Eight in ten say that this should be the case regarding “fighting terrorism” and “promoting democracy and peace” (both 80%); more than seven in ten think the same for “protecting the environment” (77%), “promoting the equal treatment of men and women” (73%) as well as for “dealing with migration issues from outside the EU” (71%).