You are here: Home / MidEastGulf / Imam of Anwar Mosque executed by ISIS militants in western Mosul 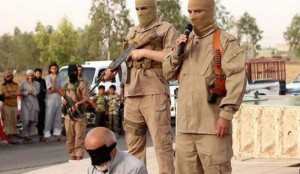 The ISIS terror group has executed the Imam and preacher of Anwar mosque in Hamidat area in western Mosul, The local residents in Mosul revealed on Thursday.

Eyewitnesses reported for IraqiNews.com, “ISIS executed Sheikh Abu Mohammed al-Hamdani, Imam and preacher of Anwar mosque in Hamidat area by firing squad in front of a gathering of people,” pointing out that, “The Imam was executed after refusing to shelter ISIS leaders inside the mosque.”

The eyewitnesses added, “ISIS is trying to find havens for its foreign members to stay away from the air strikes that target their headquarters.”