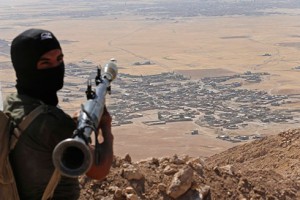 The number of average daily attacks carried out by ISIS worldwide jumped 42 percent over the past three months, according to new data published Thursday.

IHS Jane’s Terrorism and Insurgency Centre recorded a total of 1,086 ISIS attacks worldwide between July 1 and Sept. 30 — and the average daily number of attacks jumped to 11.8 from 8.3 in the preceding quarter.

The true number of attacks was likely “far higher,” according to IHS, because the data only included operations claimed by the militants or definitively linked to them by governments.

The average daily death toll also jumped significantly over the reporting period, according to IHS. There were 2,978 non-militant fatalities — at an average of 32.4 per day, a 65.3 percent increase from the previous quarter.

“The group’s capacity to wage a territorial-focused insurgency in conjunction with a punitive campaign of terrorist attacks remains undiminished despite an increasingly broad spectrum of armed opposition,” IHS said.

The rate of attacks notably rose during a time period where ISIS did not manage to expand much in terms of territory, according to IHS.

“We’re probably more in a consolidation phase currently where the group is stabilizing gains its made and protecting those gains,” said Matthew Henman, head of IHS Jane’s Terrorism and Insurgency Center.

That hasn’t diminished ISIS ability to cause havoc by carrying out attacks — including in areas they don’t control, he added.

IHS’ data showed the vast majority of attacks during the reporting period — just over 83 percent — were in Iraq and Syria, the heartland of ISIS’ self-proclaimed caliphate.

Those 902 ISIS attacks — up from 667 in the previous quarter — resulted in 1,780 non-militant fatalities, according to IHS. While those casualties represented nearly 60 percent of the deaths attributed to ISIS worldwide over the reporting period, it was only a slight increase from the previous quarter’s tally in Iraq and Syria.

However, ISIS-linked attacks outside of Iraq and Syria — like in Nigeria — were less frequent comparatively but inflicted higher death tolls.

“This underlines the nature of the group’s insurgency in Nigeria and several bordering countries, with its operations characterized by mass-casualty operations targeting the civilian population,” IHS said.

The IHS data was recorded before Russia decided to launch airstrikes over Syria. However, it reinforces previous indications that a multinational campaign has done little to blunt ISIS capability to carry out attacks in Iraq and Syria — though attempts to degrade ISIS in Iraq and Syria might soon be beside the point.

A year or 18 months ago, defeating ISIS in Iraq and Syria would have meant “game over” for the group, according to Henman. That’s changed now thanks to the group’s expansion into other countries and regions — indicating that defeating ISIS in their heartland could become a less meaningful victory.

“It becomes much more a case of: You cut one head off the hydra but there are still plenty of other heads,” he explained.