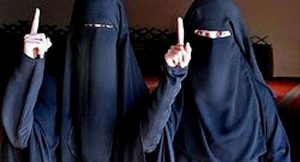 The collapse of the caliphate has been pushing women toward a more violent role in jihad, a new report found, increasing the risk posed by homegrown radicalized women as well as those coming home with on-the-ground training from Syria or Iraq, like reported by pjmedia.com.

The report, “Jihadist Women: A threat not to be underestimated,” was released mid-month by the Dutch General Intelligence and Security Service (AIVD).

“In many cases, jihadist women are at least as dedicated to jihadism as men. They pose a threat to the Netherlands by recruiting others, producing and disseminating propaganda, and raising funds. Moreover, they indoctrinate their children with jihadist ideology,” the report states. “Women form an essential part of the jihadist movement, both in the Netherlands and in the conflict area in Syria and Iraq.”

As of this November, security services had identified “around one hundred women in the Netherlands who adhere to jihadist ideology.” In addition to that, “at least eighty Dutch women have travelled to Syria and Iraq since 2012” — unprecedented emigration to a terrorist conflict zone. The “vast majority” of those women joined ISIS.

The report notes that while al-Qaeda sees women as having a supporting role at most in jihad, ISIS has opened up to “more active and violent” roles for women as “a pragmatic and opportunistic organisation that is searching for new possibilities, especially in view of its dwindling numbers of male fighters.”

The possibility that jihadist women may launch terrorist attacks “may well increase,” the report finds, while women are also involved in “recruitment, the production and dissemination of propaganda, the raising of funds, and the indoctrination of their children with jihadist ideology.”

In the Netherlands, women who pick the route of jihad are most often involved in a social network with the like-minded who further their radicalization. “These women do not always immediately realise that their contacts are jihadists, although some intentionally seek out jihadists to talk to,” the report states. “Some women radicalise largely without any contact with jihadists, and only come into contact with like-minded people at a later time.”

The community is “part of the appeal” for women jihadists, who “can easily find (jihadist) female friends and male suitors” in a short period of time.

More than half of the identified Dutch women jihadists are between the ages of 16 and 25.

Once radicalized, jihadi women attempted to radicalize others “by entering into online and offline discussions and by disseminating jihadist propaganda,” the report continues. “This propaganda often focuses on the plight of Muslims (especially children) in war zones, discrimination in the West, and the jihadists’ justification of violence as a legitimate response.”

In ISIS territory, there are at least 100 Dutch children, most “very young,” being raised in jihad, though it’s difficult for AIVD to ascertain how many children have been born to Dutch women who traveled to Syria or Iraq.

“More than ten women have returned to the Netherlands” from the conflict zone, even though “jihadist groups take steps to prevent men and women from going back.”

“For some of the female returnees, disillusionment played a major role in their decision. The fact that they come back disappointed does not mean they have renounced their jihadist ideas. In the Netherlands, a number of them have resumed their old roles, or even taken more prominent positions in their jihadist social networks,” AIVD found. “The subsequent attention from the authorities and the public can raise a female returnee’s profile among jihadists. Other women seem to want little more to do with their jihadist contacts after they return.”

Those women who returned in the caliphate’s early days were in Syria or Iraq for six months or less, but women driven back to the Netherlands by the collapsing caliphate nowadays will have had about three years of residence there. They’ve “been exposed to jihadist ideology and violence for a longer time, and they have built an international jihadist network,” the report warns, noting that “after their return to the Netherlands a considerable number of them will retain their jihadist ideas and connections, to a greater or lesser extent.”

“Until recently, the fact that ISIS and al-Qaeda did not explicitly allow women to commit attacks may have acted as a barrier. Now that ISIS is encouraging women to participate in the fight, women in the Netherlands could be inspired to turn to violence,” a threat “subject to rapid change.”