You are here: Home / Mediterranean / If Libya falls to terrorists, terrorism will spread to Europe 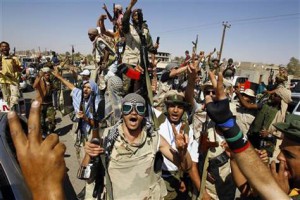 Libya’s charges d’affaires at the Libyan embassy in Washington DC, Wafa Bugaighis, said that the international community should support its internationally recognized government and provide military aid to its Libyan National Army and support legitimacy in Libya – in order to limit the spread of IS in Libya.

Bugaighis, speaking to Bloomberg,  said that “the intervention in 2011 (by NATO) was welcomed. The situation now is different. We are a bit cautious that such strikes might not succeed in fighting terrorism because these people just dissolve and spread.”

“Our vision is that terrorism can be tackled now with information, intelligence, special operations, Special Forces. That will be more effective in fighting terrorism and this is the type of support we want.”, she said indicating that she did not think it was the right time for the western forces to bomb IS in Libya.

On the international community refusing to arm Libya now and choosing to wait until one unity government is formed, Bugaighis said that “many people say there are two governments in Libya. This is not true. The fact is one is legitimate and democratically elected, one is self-proclaimed and completely illegitimate.”

“The issue is, can we afford waiting? Terrorism is not going to give us a break and wait for us to form a government of national unity.” Bugaighis warned.

“Libya should not fall into the hands of terrorists. The danger of terrorism, if it takes over Libya, will not be contained to Libya”, she added, sounding a word of caution.